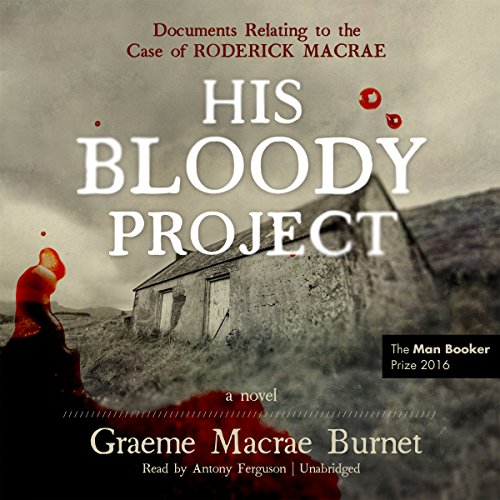 By: Graeme Macrae Burnet
Narrated by: Antony Ferguson
Try for $0.00

The year is 1869. A brutal triple murder in a remote community in the Scottish highlands leads to the arrest of a young man by the name of Roderick Macrae. A memoir written by the accused makes it clear that he is guilty, but it falls to the country's finest legal and psychiatric minds to uncover what drove him to commit such merciless acts of violence. Was he mad? Only the persuasive powers of his advocate stand between Macrae and the gallows.

Graeme Macrae Burnet tells an irresistible and original story about the provisional nature of truth, even when the facts seem clear. His Bloody Project is a mesmerizing literary thriller set in an unforgiving landscape where the exercise of power is arbitrary.

What listeners say about His Bloody Project

I enjoyed this book a lot. The plot was well developed and the characters were reasonably well drawn, given (as it seems to me) the main point of the book was to explore a theme: specifically, the emerging Victorian science of criminal anthropology - trying to codify the influence of genetics on the criminal; and more broadly, how depression and other forms of mental illness may lead to criminal behavior, and to what extent this is a mitigating circumstance. I liked the way the author didn't land heavily on an answer but left many ideas hanging in the air for the listener to explore. He let you see that this was a new concept for the times, but there were a lot of things the Victorians didn't yet understand that we now know, thus introducing some irony in the fate of the character. It was a good story as well!

My main beef was with the choice of narrator. This was a book set in the north of Scotland, where all the characters were Scottish. So why on earth did Audible get an English actor to perform it?? His accent was 90% there but the 10% that wasn't really irritated me. The pace was off because he was trying too hard to get the accent down. He read it in a sing-song intonation which I guess could have been a Highland lilt but I'd have liked a more dour reading, personally. The author wasn't served by the narrator's unfamiliarity with some esoteric words like "demur", which he pronounced as "demure"; "midfrift" for midriff (maybe that's a Scots variant??), especially given this won the Man Booker Prize. I would definitely listen to other books narrated by Antony Ferguson; I just didn't think he was right for this one.

Wonderful book for history buffs. Portraying a true example of what life was like in the mid 1800's for the majority of people in the country side. Not a pretty picture. Very hard life with no freedom or chances of improving. Do not listen if you have a tendency toward depression. "No happily ever after"

Excellent performance rendering many voices and accents redering characters. If you read this as an intellectual costruct which reveals the author's extensive research, you won't be disappointed.
Tiny quibble with the glossary definition of stirk, but perhaps a part of Scotland where bovine sex denomination is reversed.

From the start, it is predetermined that this will be a tragic story. Although the narration is fine, the format of the book is better read than listened to.

Wow. What a snooze fest! The description of mid-19th century Scottish life in a small village was vaguely interesting, but the rest was plodding and predictable.


This novel brilliantly seats the reader as detective (or perhaps juror) on the savage, gruesome gouging and murders of the town bully and two of his children in a small farm community on the high coast of Scotland. It's a blend of narrative from the killer and statements to the constable, medical reports and trial transcript, portrayed as a recently discovered manuscript. The issue is not whether he committed the crime but his mental capacity at the time of the murders.

The narrative evokes dark clouds covering a grim community full of poverty, in the laird, the weather, the church, the small crofts, tattered clothes, and a rampaging bully set to suit himself in the way of a teenage lady. It blusters with black humor and just when you think you have it figured out it cold-cocks you with a crucial clue.

His Bloody Project is a gripping psychological thriller that--I like how The Guardian reviewer described it--"play[s] lovingly with the traditions of Scottish literature; an artful portrait of a remote crofting community in the 19th century that showcases theories about class and criminology," says The Guardian.

Quite liked the story. Found the cultural examination of Scotland life interesting, as well as the historical perpective of Scotland's parallel societies, and what life was like among the "have nots". Well worth your time.

This is how you tell a story. Performance is well done as well. Highly recommended.

Despite knowing how this tale shall end, I couldn't stop listening. The narration is marvelous, with an ease for accent and dialect. I listened twice. You can't help but be moved, and shake your head at how little things have changed for the working class or justice and mental health.