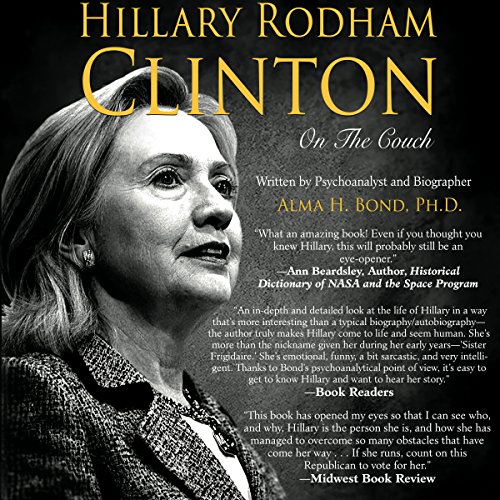 Hillary Rodham Clinton: On The Couch: Inside the Mind and Life of Hillary Clinton

In the fourth installment of her On the Couch series, famed female biographer Dr. Alma Bond looks inside the head and life of the presidential frontrunner and informs voters of what she's found.

What listeners say about Hillary Rodham Clinton: On The Couch: Inside the Mind and Life of Hillary Clinton

A Glimpse into Hillary Clinton's Mind.

What made the experience of listening to Hillary Rodham Clinton: On The Couch: Inside the Mind and Life of Hillary Clinton the most enjoyable?

Hillary's life-story unfolds as told to her analyst. It is like sitting-in on her sessions. You hear all about her life and how she reacted emotionally (or failed to react) to it. It is well-written and completely fascinating.

What other book might you compare Hillary Rodham Clinton: On The Couch: Inside the Mind and Life of Hillary Clinton to and why?

This book reminds me of "Bringing Down the House" by Ben Mezrich. It has the same first person tell-all feel. It also has a sensational story that happened to a normal person (girl next door in Hillary's case) feel.

Which character – as performed by Amanda Fugate-Moss – was your favorite?

The narrator does a really good job of capturing the analyst. She sounds just like your analyst. She does a respectable job of Hillary as well, although she makes her a bit monotone at times.

It is 9 hrs. long. That is quite a commute. Probably best in more manageable chunks.

I received this audio-book for free in exchange for an honest review.

This is not a book I liked.If the author was really a therapist,Mrs Clinton should sue her.The writing was dull.The narrator,Amanda Fugate-Moss made Mrs Clinton sound like she was on weed,and the rest of the characters on helium. I was gifted this book for a honest review.Done.

Fact or Fiction? Did Mrs. Clinton REALLY Sit Down


Fact or Fiction? Did Mrs. Clinton REALLY Sit Down For These Long Confessions?

This is a bit of a tough one for me. I'm not sure if this is fact or fiction. Did Mrs. Clinton really seek Alma H. Bond and her psychotherapy? Or is this the author's interpretation or impression of what she thinks Mrs. Clinton would say or feel?

At times, it felt like it was a legitimate therapy session, but as the book went on it felt like Bond became Mrs. Clinton's cheerleader. That added to my confusion.

It definitely had aspects of rewriting history – Mrs. Clinton's accomplishments during her tenure as Secretary of State, the attack that lead to the deaths of 4 Americans in Benghazi and whether she holds any culpability, is still not known as I write this. However, Dr. Bond writes that Mrs. Clinton expresses [Benghazi] as a simple mishap that she feels badly about. There is no mention of the deceit waged on the American people (these uprisings happen because of an anti-Islam video) - we were told this lie, and even more erroneously, she repeated this to the families of the fallen.

Bond referred many, many times to Mrs. Clinton's speaking of her relationship with Former President Clinton. Perhaps it is just me, but after 20+ years of his womanizing, I would not be speaking of him as that of a 13 year old girl with her first crush. Perhaps Bond felt that way. While I am sure Mrs. Clinton has affection for him, as they've been married for over 40 years. However, even in the final chapters, there were references of Mrs. Clinton often saying he's such a good man, he is so handsome and other silly, girlish sentiments that I don't believe Mrs. Clinton, a 60-year-old woman would use.

The narration was solid. There were only two main characters to portray, the therapist and Mrs. Clinton. As another reviewer pointed out, the performance of Mrs. Clinton was monotonous – however, I believe that it is an accurate portrayal. The author wrote this as Mrs. Clinton recounting her life. It was not "in the moment" where emotions would run high or low. The portrayal of Bond sounded exactly as I would expect most therapist/analyst.

This is not a history book nor should be treated as such. It is a memoir written by a [not very subtle] admirer of Mrs. Clinton, that factor should be weighed in if one chooses to listen to the book.

Notes: Nothing to warn about as far as language, themes, etc

the story. I enjoyed the performance. She is able to perform each character in a believable way. Some female narrators sound silly when they try too hard performing male characters. It becomes distracting. That is not the case with Pamela. It feels like she is telling the story and it is very natural. 4*'s

*I was given a copy of this book to listen to in exchange for my review.*

I enjoy leaving reviews, as I know that I read them the reviews of others before I purchase a book. If you found my review helpful in your decision about this book, would you please select yes directly below this review? Thank you so much.

Please consider "following me" here on Audible.com. I purchase a lot of books by authors that I am faithful to. I also have the opportunity to review books in all genres, many that I would not pick up on my own. I have been pleasantly surprised by new authors and narrators. Thanks!

My favorite thing about this book was the narrator. Solid performance! I will check out some more of her books.

Don't read this rubbish. Badly wrtten. In poor taste. Deleted from my library, I should get my money bzck.