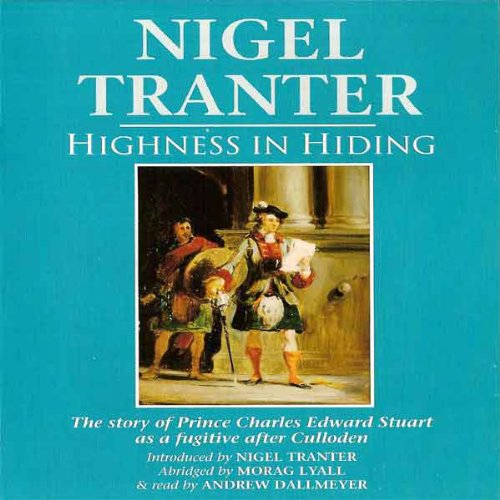 Here is a dramatic account of Prince Charles in the seven months after the battle of Culloden. Throughout the Summer of 1746, he was a refugee in the Hebrides, hunted by the British Naval forces with a price of £30,000 on his head.
©1995 Nigel Tranter (P)1995 Novelsound
Great Britain
Show more Show less

What listeners say about Highness in Hiding

"Highness in Hiding" by Nigel Tranter.

Bonnie Prince Charlie's wandering and eventually escapes after the defeat at culloden. Bonnie Prince Charlie is one of the best-known historical Scottish heroes .He was not, however, Scottish, but was born into the Stuart Dynasty in Rome, Italy on December 31, 1720. King James II's eldest legitimate grandson, Prince Charles Edward Stuart, known everywhere as 'Bonnie Prince Charlie', achieved international fame at the age of twenty five as the man who by his charisma, daring and energy led the Rising of 1745 against George II which all but succeeded in restoring his exiled royal family - the Stuarts - to their thrones of Scotland, England and Ireland Prince.Many of the Scottish people believed in the 'divine right of Kings', in other words, the unquestioning right of the Stuarts, chosen by God, to regain the thrones they had lost. The defeat at Culloden had wide-reaching implications for the Scots. The English government imposed strict laws, especially targeting the Clans. These included making it illegal for Highlanders to carry instruments of War (e.g. swords, targets and bagpipes) or to wear the tartan and the kilt. Jacobite supporters were either executed or forced to emigrate and their land was turned over to George II who distributed it amongst his English supporters. Culloden thus changed the ancient Clan system forever. Emigration resulted in Scots scattered all over the world and intermarriages with other cultures and races became inevitable. Thus, Bonnie Prince Charlie's' failed attempt to regain the thrones for the Stuarts had a wide-reaching and long-lasting impact on Scottish culture and on suppression of the Scots by the English. This Audio book can be a fascinating overall performance. This is two hour 44 min in story length and very clear voice throwing. You will NOT be disappointed.