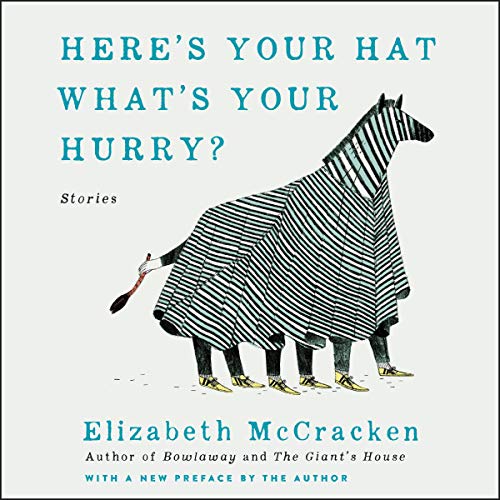 Here's Your Hat What's Your Hurry

By: Elizabeth McCracken
Narrated by: Kate Reading,Johnny Heller
Try for $0.00

The singular, enchanting debut story collection from Elizabeth McCracken, now back as part of Ecco’s “Art of the Story” series and with a new introduction from the author.

Called “astonishingly assured” by The Guardian, the nine stories that make up Elizabeth McCracken’s debut story collection deal with oddball characters doing their very best to forge connections with those around them.

In “It’s Bad Luck to Die”, a woman marries an older tattoo artist and finds comfort in agreeing to act as a canvas for his most elaborate work. “Some Have Entertained Angels, Unaware” follows a young girl as she comes face-to-face with a cast of eccentrics her recently widowed father has invited to live in their expansive but dilapidated home. And in the title story, a young man and his wife are perplexed when an outspoken old woman shows up on their doorstep for a visit, claiming to be a distant aunt, even though she can’t be traced on a family tree.

At once captivating and offbeat, Here’s Your Hat What’s Your Hurry is a dazzling showcase of the early years of Elizabeth McCracken’s prodigious talent.

What listeners say about Here's Your Hat What's Your Hurry