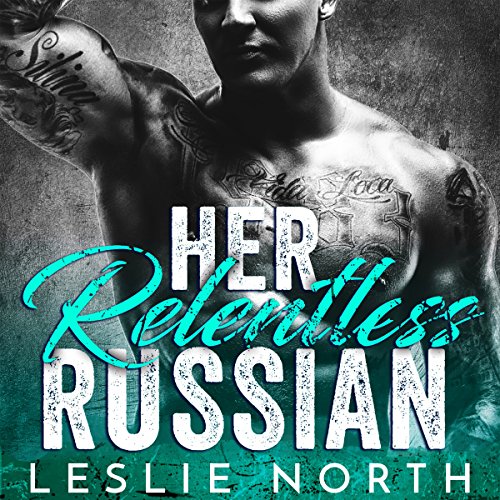 Rare bookstore owner Dmitry Karev left the Russian Mafia behind when his wife died, but there's too much at stake to keep his back turned any longer. His father is dead and his brothers may be next. Someone's been leaving Dmitry clues about the killer, but he never expected his informant to be a bombshell like Harper Allen. Now the curvy computer expert is testing not only Dmitry's methodical nature, but his self-restraint as well. But with his family's lives in the balance, Harper may be the best chance Dmitry's got to catch a killer.

When hacker Harper Allen's parents used her college money to pay off the Mafia, it was Sergey Karev who financed her education. Now that he's been murdered, she's repaying him the only way she can...by helping his son solve the crime. To follow the trail any further, though, she'll have to convince Dmitry to work with her. The buttoned-up Russian seems hesitant at first, but it doesn't take long for Harper to discover what's beneath Dmitry's icy cool demeanor.

As Harper and Dmitry worm their way deeper into the Russian Mafia, their chemistry becomes undeniable. But with a killer at their heels, they'll have to stay focused if they want to stay alive.

What listeners say about Her Relentless Russian

The mystery is finally solved...


These men are dominant personalities. Protective of the ones they love, brutal when needed but honor means everything to them and family is just as important. Her Relentless Russian is a race to get answers that culminates in a plethora of danger, suspense and lustful romance. Harper and Dmitry make for an adventurous duo. Ride or die, they have each others back. Move over Bonnie and Clyde. Uniquely narrated by Mr. Cole, Her Relentless Russian was a hunk of burning love.

I really enjoyed this short story! This author is so talented! Her stories flow so naturally and have everything you need for a great story. This book is part of a series but you can read it as a stand alone. I would recommend reading the previous books though because they are so good and the story builds well and we finally figured out who the killer was.

The narration was just amazing! I love DC Cole’s voice! He changes his voice for multiple characters and brings the story to life!

I enjoyed the twists and turns in this book and could not put it down! Leslie North is a great story writer and keeps you entertained all the way through! I really enjoyed the way the story begins with a fun twist right off the bat!

This is a fun, quick listen. While I would like to have seen some scenes fleshed out a bit more, this series was fun. It kept me wanting to know what would happen next, and who the heck killed Daddy Karev, without leaving me frustrated or feeling like it was a cliffhanger.

D.C. Cole does his usual masterful performance, which really keeps you engaged in the story. Each character is so distinct and he just pulls you into each scene.

What an exciting conclusion to the Karev Brothers series! We finally get Dmitri's story and he was worth the wait. He finally meets the computer hacker who has been slipping him information about his father murder. It turns out to be a sexy free spirited woman named Harper. Together they track down clues, get into dangerous situations, and give in to their passions. This quick story is funny, suspenseful and sexy. It was fast paced and had some twists and turns that made it totally engaging. I was lost in DC Cole's narration as he brings this thrilling story to life. His inflections and voice changes were perfect, making me feel every emotion and I absolutely love his Russian accent. I definitely recommend giving this series a listen!

Finally! We know who did it!

After listening to the first two books in the series, I could not wait to get this and find out who the killer was. We meet the last of the Karev brothers, Dmitry in this installment. He seems to have kept to himself since his wife died, but when Harper happens into his life and works her way into helping him find his father's killer, that all changes. Harper is a hacker, a very independent, spunky woman. I love how Leslie North can bring an alpha man and such a strong willed woman together and have their chemistry sizzle. These two do not disappoint! After a few twists and turns through this book and seeing characters from the previous stories, the answers I have been waiting for come to light. These Russian men are a force to be reckoned with and a lot of fun to get to know.

DC Cole finishes out this series with his incredible ability to narrate. I love the inflections he uses in his voices to get the point across. It draws you into the scene and you can picture the look on the faces of the characters. Always bringing his best, you will love his performance and enjoy the book.

The mystery is finally solved in this third instalment of the Karen Brothers. I really enjoyed the flirty and fun banter between the straight laced Russian bookworm Dmitry and the sassy hacker Harper! As in the previous books, the narrative is fast paced and packs a punch! This was a very quick listen and highly enjoyable thanks to the husky and sexy sound of DC Cole in my ears.

I enjoyed listening to this book by Leslie North. I love how DC Cole is able to change his voice for various characters. I do not write a synopsis of the book nor try to give away spoilers. That said I loved the twists this book had. I was pulled into the story from the first book in the series. This book is a standalone listen and part of a series. I thought the author did great in revealing who the killer was. I will definitely listen to more books by Leslie North and DC Cole.

This is the last installment in the Karev Brothers series. And this time we finally get to the bottom of who killed their father. Harper is a hacker that felt a connection to their father and is trying to help solve the mystery behind the scenes until she gets sloppy and Dmitry catches her. He has no idea what she’s up to. I loved Harpers! Her character is so fun and full of life!

Nice spin of a Mafia Story

Bad boy gone good? Would have loved a Russian accent. But a thoroughly good book and series. "I was given this free review copy audiobook at my request and have voluntarily left this review."

Dmitry and Harper's story is awesome. I love the push and pull between the two of them. Then there is the excitement and the clue trail and it is all absolutely yummy. D. C. Cole did another amazing job narrating and his voice just carried all of the emotions across so well. I love Leslie's books and I hope I get to listen to every last one of them.