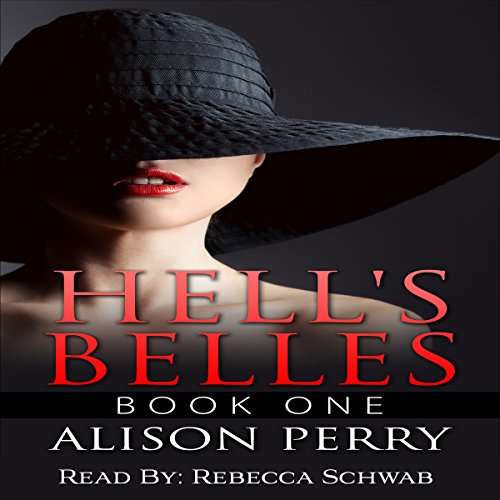 By: Alison Perry
Narrated by: Rebecca Schwab
Try for $0.00

California girl Emma Ayers' life has just been shaken by sudden tragedy. On top of losing everything, she's also been forced to move across the country to Charleston, South Carolina. Emma now lives in the infamous South-of-Broad section of the city, surrounded by old money and even older mystery. It's a universe away from her normal teenage life and not just because of distance. Charleston holds its share of secrets, and Emma seems to be part of the biggest one of all.

She just doesn't know it yet.

That's where Hell's Belles come in. It's one of the oldest debutante societies in the South, and yet no one knows anything about them, only that you don't mess with a Belle.

Living among the mansions and manors of the Holy City, the Belles use their wiles and not a small bit of witchcraft to achieve their every mysterious ambition.

Their world and the old aristocratic rules they live by are about to collide with Emma's mundane and doleful life. Emma has always felt there was nothing extraordinary about her. What happens to a girl who finds out there's more to everything than she ever could have imagined?

What listeners say about Hell's Belles

A Small Part of a Bigger Secret!

Narration - Rebecca Schwab - Pretty Good. Mostly females in this story ranging from teenagers to a grandma in her 90's.

First, after reading some other reviews...you need to understand before you start, that this is a SERIAL - not to be confused with a series or a trilogy. That means that you are getting short 'episodes' similar to a TV series and usually each less than a 2 hour read. Each one will probably end on a cliffy and the next 'episode' which will also be short and cliff-hangerish will come out in fairly quick succession. The first book in a serial introduces you to the characters, the location and usually gives you a hint of what's to come. If that's not your thing, then look away...nothing to see/hear, here!

So, with that out of the way, This is a serial about our main character Emma, a teenager whose entire life has been turned upside down.

Following a week of tragic events and finding herself with no family (that wants her anyway) Emma is whirling, finding herself suddenly orphaned and homeless. She's now heading to Charleston, South Carolina with a complete stranger (a friend of her grandmother) who seems to be keeping things from her. Once settled in the very lavish accommodations of her new guardian, she begins to meet the new people in her life and we're led through additional indications of a bigger purpose to this move than just someone being kind and keeping a young girl from the foster care system. Emma is now part of a bigger secret and we're just given a taste of what's to come.

Pretty interesting start to a new serial with indications of paranormal abilities and some mystery, so if you enjoy that type of read/listen, I think this will be one that you'll enjoy. I'll definitely be continuing!


I received a copy of this audiobook free of charge from Audiobookblast in exchange for an unbiased review.

What made the experience of listening to Hell's Belles the most enjoyable?

This was a really fun listening . I love that the main character is someone that everyone can relate to. The plot revolve around a lot of mystery- namely that there is something going big.

I was provided this audio book at no charge by the author of this book in exchange for an unbiased review of this book.
I liked this story but I think it was too short. It seems that it is just laying the foundation for a great story but doesn't really have much of a story itself. I have high hopes for the rest of the series but think this one could have been a bit longer.

Love the set up, now I'd like a plot!

I received this audiobook for free in exchange for an honest review.I couldn't decide between three and four stars. I enjoyed this story. I liked the setting and the number of female characters. I'm intrigued by the mystery. The characters seemed real, and I could relate to them. However, this story isn't a story. The plot is completely unfinished because this is really only the beginning of the story.The main character's strange talent and relationship to her sister and family is an important part of her development, and it comes too far toward the end of the book. The hints of paranormalcy also show up pretty late in the book.

Too soon. I want to get to the meat of the plot, but I feel that making this much of the story its own book isn't enough.

It seemed accurate to the characters without detracting from the story.

Did Hell's Belles inspire you to do anything?

Book One in a Promising Series ...

I thought that the book did a good job of setting up the series. You get enough background of your lead heroine Emma without making it seem like it is dragging. I look forward to the next installment.

Ms. Schwab has a good voice for the YA genre. She shows range with her voice with both the youth and adult characters. I look forward to listening to more of her work.

What did you love best about Hell's Belles?

The camaraderie between all the ladies that seemed to bring Emma in at the end of the story.

The mystery of what is so special about Emma.

Have you listened to any of Rebecca Schwab’s other performances before? How does this one compare?

I don't think I have so I don't have anything to compare her to. I enjoyed listening to her voice. It had the right amount of pitch and tone to keep me interested and listening to the story without my mind wandering.

Sadness, when Emma talked about the memories of her family

This audiobook was provided by the author, narrator, or publisher at no cost in exchange for an unbiased review courtesy of AudiobookBlast dot com. I will definitely follow this series.

Hell's Belles starts with Emma Ayers losing her parents and her grandmother. She is taken to Charleston, South Carolina to live with her aunt. She is met with four of her cousins. Emma also noticed that her cousins and aunt are keeping a secret from her. As she started to question the reason of why she is there, she discovered there is more to the Hell's Belles and her role in it.

Hell's Belles is a very unique story of debutantes who are witches and a secret that is yet to be discover in this book. This story also reveals each of the Hell's Belles past which will gives the readers/listeners a comprehension and connection to each of the characters.

The narrator, Rebecca Schwab provides the perfect voice for Emma and the rest of the Hell's Belles. She makes her voice sounds like teenagers with attitudes. The housekeeper sounds wise and believes that Emma should know some of the Hell's Belles history.

I was given this audiobook by the author via Audiobook Blast in exchange for an honest review. I was not compensated or influenced in any way for writing this review.

Let me say first that I received this series for free for my honest and unbiased opinion.With that said I enjoyed the whole thing ,sure it could have just been one book. I liked the narrator and it flowed well.

Great story line love the historic references. I read all three in the series in two days. If your not a believer of people living for ever this will change your outlook. I am a firm believer in the healing powers of mother earth and the roots around us.
I received this free from the author for an honest review.

This is a good start and concept.

Would you be willing to try another book from Alison Perry? Why or why not?

Yes I am going to read the next one in the series.

Could you see Hell's Belles being made into a movie or a TV series? Who should the stars be?

Selena Gomez would be good as Emma.