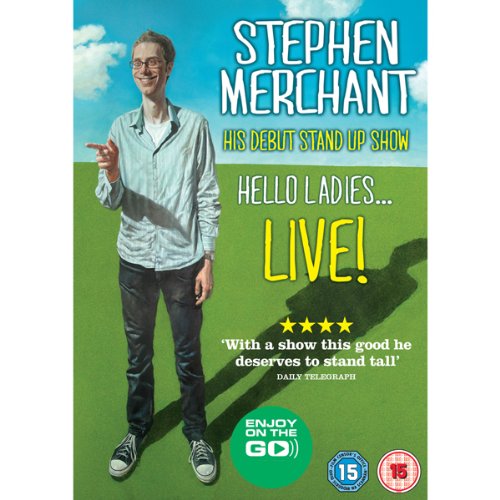 Stephen Merchant, the Emmy, BAFTA and Golden Globe award winning co-creator of The Office and Extras in his first ever live stand-up comedy tour and it has been well worth the wait. The Guardian says "his performance is priceless...he can do funny just by being there" and The Times states that "the man is hilarious".

What listeners say about Hello Ladies

Such a unique view of life. Enjoyed it immensely. Found myself laughing out loud like a crazy person.

very hard to understanding what stephen is saying and the main problem is that the comedy is very visual, certainly not suitbale for audio format. i only paid 1.99 for it so not too bothered about the cost but should be pulled from the library and no longer advertised. absolute drivel !

Not good in audio format

Most of the jokes are visual probably better watched on tv! Does not work in audio format at all

The show relies a lot on visual comedy

Merchant is funny, and the material is good, but it doesn't really work as an audio book as much of the jokes are visual.

Go to a funeral instead of listening to this toss

If you go to a funeral at one point a story will make you smile or even laugh. It only lasts 30 minutes too.

There is too much visual humour.

Really miss a lot of the jokes because there were visual aids to the performance. Soz.

Super funny but some sight required...

A brilliant stand up by one of my favourite comedians. If you've heard Stephen talk before on podcasts or the like then you know what you are getting. Only reason for dropping a star is because a fair chunk of his act requires a bit of sight to be able to fully understand his jokes. Obviously as an audio file this is lacking and so can take away from the overall performance. However, he still delivers lots of laughs and overall is a good stand up performance.