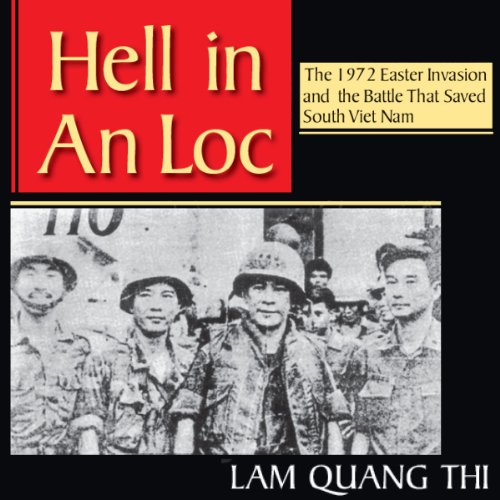 Hell in An Loc: The 1972 Easter Invasion and the Battle That Saved South Viet Nam

Hell in An Loc: The 1972 Easter Invasion and the Battle That Saved South Viet Nam

By: Lam Quang Thi
Narrated by: Gregg A. Rizzo

In 1972 a North Vietnamese offensive of more than 30,000 men and one hundred tanks smashed into South Vietnam and raced to capture Saigon. All that stood in their way was a small band of 6,800 South Vietnamese (ARVN) soldiers and militiamen, and a handful of American advisors with U.S. air support, guarding An Loc, a town sixty miles north of Saigon and on the main highway to it.

This depleted army, outnumbered and outgunned, stood its ground and fought to the end and succeeded. Against all expectations, the ARVN beat back furious assaults from three North Vietnamese divisions, supported by artillery and armored regiments, during three months of savage fighting.

"A meticulous account created specifically to set the historical record straight, Hell in An Loc is highly recommended." ( Midwest Book Review)
"This book is a unique work, written by a participant in the war, from a fresh historical vantage point, utilizing new evidence. Hell in An Loc will be a powerful addition to the historiography of the Vietnam conflict." (Andrew Wiest, author of Vietnam's Forgotten Army: Heroism and Betrayal in the ARVN)
"General Thi has brought his unique perspective as a Vietnamese citizen and as a South Vietnamese officer to an important battle of the Vietnam War. The value of this book is its operational detail about the South Vietnamese, which surpasses any of the accounts in print up to this point." (Dale Andrade, author of America's Last Vietnam Battle)