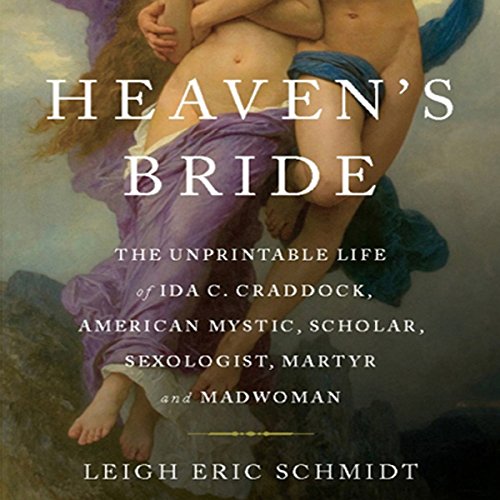 By: Eric Leigh Schmidt
Narrated by: Brice Lewis
Try for $0.00

The 19th-century eccentric Ida C. Craddock was by turns a secular freethinker, a religious visionary, a civil-liberties advocate, and a resolute defender of belly-dancing. Arrested and tried repeatedly on obscenity charges, she was deemed a danger to public morality for her candor about sexuality. By the end of her life, Craddock, the nemesis of the notorious vice crusader Anthony Comstock, had become a favorite of free-speech defenders and womens rights activists. She soon became as well the case-history darling of one of America's earliest and most determined Freudians.

In Heaven's Bride, prize-winning historian Leigh Eric Schmidt offers a rich biography of this forgotten mystic, who occupied the seemingly incongruous roles of yoga priestess, suppressed sexologist, and suspected madwoman. In Schmidt's evocative telling, Craddock's story reveals the beginning of the end of Christian America, a harbinger of spiritual variety and sexual revolution.

"Leigh Schmidt offers us a compulsively readable account of the tragic, fantastic, and utterly idiosyncratic life of Ira Craddock, self-taught scholar, mystic, sex reformer, and psychoanalytic subject. Sympathetic toward Craddock, yet even-handed in his treatment of both her admirers and her vehemently critical detractors, Schmidt opens a window on the fierce ideological cross-currents at the intersection of sexuality, psychology, and religion at the turn of the last century. This is serious scholarship in a form that everyone can enjoy." (Ann Taves, Professor of Religious Studies, University of California at Santa Barbara)
"The mix of madness and method in Ida Craddock’s extraordinary life makes for a rollicking read, amplified by exactingly researched context. Was she a century ahead of her time? You decide." (Nancy F. Cott, Trumbull Professor of American History, Harvard University)

What listeners say about Heaven’s Bride

The narrator was so terrible that it was difficult to concentrate on the story.

Has Heaven’s Bride turned you off from other books in this genre?

He read it as if he was auditioning for an infomertial. In addition, he paused inappropriately at commas. Just awful. He made the book unlistenable.

If you could play editor, what scene or scenes would you have cut from Heaven’s Bride?

Too bad, because she sounds really interesting in the summary!