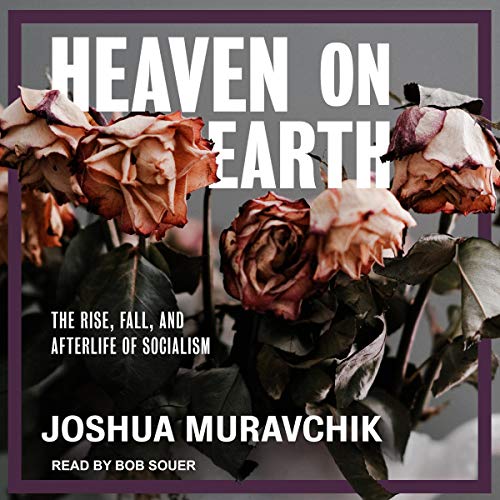 By: Joshua Muravchik
Narrated by: Bob Souer
Try for $0.00

Socialism was man's most ambitious attempt to supplant religion with a doctrine claiming to ground itself in "science". Each failure to create societies of abundance or give birth to "the New Man" inspired more searching for the path to the promised land: revolution, communes, social democracy, communism, fascism, Arab socialism, African socialism. None worked, and some exacted a staggering human toll. Then, after two centuries of wishful thinking and bitter disappointment, socialism imploded in a fin de siecle drama of falling walls and collapsing regimes. It was an astonishing denouement but what followed was no less astonishing. After the hiatus of a couple of decades, new voices were raised, as if innocent of all that had come before, proposing to try it all over again.

Joshua Muravchik traces the pursuit of this phantasm, presenting sketches of the thinkers and leaders who developed the theory, led it to power, and presided over its collapse, as well as those who are trying to revive it today. Heaven on Earth is a story filled with character and event which at the same time gives us an epic chronicle of a movement that tried to turn the world upside down - and for a time succeeded.

What listeners say about Heaven on Earth

A biased yet informative masterpiece

I myself am a syndicalist, which is technically a form of socialism, and yet even I enjoyed this book. There is a clear American neoconservative capitalist bias but it mostly doesn't cloud the surprisingly mostly well-done research and narrative of the book. It chronicles the life of modern socialism from its origins in the French Revolution by Babeuf, peaks at Lenin's USSR and Fascist Italy (while not going too far and claiming fascism is far-left and socialist. He calls its early stages far-left but shows they later went to the right and adopted capitalism and later corporatism until they attempted socialism in 1943, but highlights the socialist roots of fascism. He only briefly touched upon National Socialism), and ends with Sanders and Xi. I do however wish he went into more detail with chapters dedicated to Mao, Stalin, and Pol Pot (the last figure being mostly skimmed over) and I also noticed the occasional error in his research. For example, his chapter on fascism contains a quote taken from Hermann Rauschning, who is largely considered heavily unreliable by the historical community. Overall, a good book that anyone can learn from, especially fellow socialists who must learn the failures of socialism and the successes of capitalism to see what can be combined from the two camps.

Why does history keep repeating itself?

If you are considering socialism as a viable alternative to capitalism, please read this book! From someone initially subscribing to the doctrine, the author provided an excellent history of its failure and the associated loss of time, life and actual prosperity of those the doctrine purports to want to help.
Must reading for our youth who are considering supporting a socialist in any election!

I enjoyed this. it's a nice overview of the failed ideology and its many failed attempts, though is skipped over the very shortlived Mayflower Compact.

I marvel at the ability of this author to take a complex topic such as socialism and provide a easy to understand guided tour through 200 years of its history. By focusing on key individuals in each stage of its development, the listener is left with easily digested chunks and sees how the ideas changes over time. The book is well documented and provides a "just the facts" tone, but the repeated outcomes of the adoption by various strains of socialism are damning by themselves. The book is very relevant to the present and this version takes us through 2016 and the aftermaths. My only complaint was minor. The narrator did a nice job, but his breathing was somewhat distracting.

Really interesting review of attempts at Socialist systems (bar Scandanavia). Could maybe do with being a little more balanced.