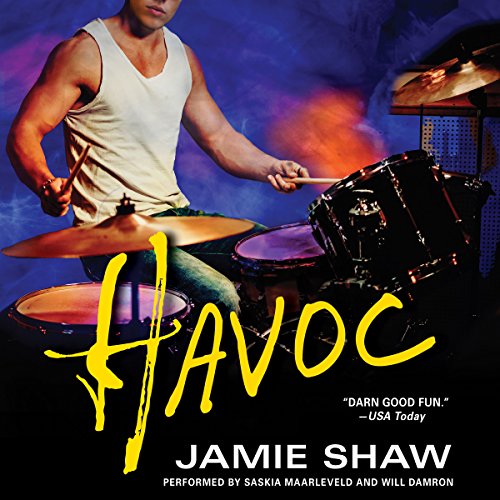 By: Jamie Shaw
Narrated by: Saskia Maarleveld,Will Damron
Try for $0.00

When Hailey Harper left her family farm to enroll in veterinary school, she had a plan: keep her head down, ace her classes, and, most importantly...don't upset the uncle paying her tuition. Translation? Don't piss off his dramatic, self-absorbed daughter, Danica, even if she's a nightmare to live with.

Falling in love with her cousin's rock star ex-boyfriend was definitely not part of the plan.

As the drummer of a now-famous rock band, Mike Madden could have any girl he wants. He's sweet, funny, romantic, talented - and the only guy who's ever made Hailey's heart do cartwheels in her chest. The more she gets to know him, the harder she falls, but Hailey knows they can never be more than friends...because Danica wants him back, and she'll fight dirty to win.

Mike is falling for Hailey, too, but Danica's threats and his rock star life - music video shoots, international tours, obsessed fans - could tear them apart before they've even begun. Hailey isn't sure she's the one for him, but Mike's waited years for a girl like her...and he'll do anything to prove it.

What listeners say about Havoc

Throughout the Mayhem series Mike has been a good guy and a true friend. It was as if Jamie Shaw saved the very best for last. Mike's dirty mouth was so unexpected, but he sure knew how to use it! He's a rock and roll good guy that everyone will enjoy getting to know.

Going out with a bang

4.5 stars for the fourth and final book in the Mayhem series by Jamie Shaw. This is Mike Madden's story - the drummer for rock band The Last One's To Know. Mike is officially the last unattached member of the band and while he has had ample opportunities to indulge in willing groupies he never did. This new adult romance is set at fictional Mayfield University in Virginia and can be read as a complete stand alone, but with hot rockers you can never go wrong.
Hailey Harper is studying pre-veterinary medicine at Mayfield and living in a deluxe apartment with her cousin Danica. Hailey is from a farm town in rural Indiana and can only attend school due to her uncle's generosity as he is paying for literally every single expense she has. Being indebted to her uncle has left Hailey in a precarious position where she has allowed her cousin - Danica - to do and say things she normally would've called her out on. Hailey doesn't want to "rock the boat" as Danica is the daughter of the man who is being kind enough to pay her way through school, but all bets are off when she falls in love.
Mike Madden fell in love with the most popular girl in school when he was in the third grade and started dating her as soon as he joined a band at fifteen. Mike and Danica dated for years until she broke his heart and never looked back until out of the blue she shows up at one of their performances. Mike always felt she was the one who got away and wanted to give them one more chance so he could move on with no regrets. Almost immediately he realized she was not the one for him, but instead her cousin - Hailey - is the girl that dreams were made of. Now he has to shake Danica loose and convince Hailey that they can and should make a relationship work.
This book was very heavy on the angst, but it was also filled with laughs, love and sexy to balance it all out. Then don't even get me started on the chemistry that Mike and Hailey had, it was so off the charts hot it made for some smoking hot scenes to say the least! I am seriously hoping the author will consider writing a "where are they now" novella about the band ten years or so from the date of the epilogue (a girl can dream)!

I have loved and listened to theses books on repeat while waiting for Mike's story, and I wasn't disappointed.
One of my all time favorite series!

Liked But Hard to Finish

I was looking forward to Mike's story as I adored him from the very beginning in book 1 with his sweet personality, but I have to admit I had a hard time listening to the majority of this book. The reason being is his ex Danica. She is such a manipulating bitch there were many times I just wanted to stop listening because I cannot stand people like her and it was really hard because for the most part Mike and Hailey would defend her to others even when they knew she was a bitch. So frustrating! I just wanted to scream, WTF is wrong with you people! But I guess it wouldn't make for a good book/story if the ex wasn't so hated. When Hailey did finally stand up to Danica it was awesome. I was also somewhat disappointed with the overall ending of the series, not this individual book but the series as a whole. It somewhat wrapped up Mike and Hailey's story for the time being and delved a little into Adam and Rowan's future on what was to come in a few months for them, but no one else. When I read a series I prefer that the final book give a good epilogue that will give you a peak into all the main characters from all the books and go a few years into the future on each of them. It helps wrap up everyone's story down the road and gives me closure, but that may just be me. Like all the other books, the female narrator covered 95% of the book with the male narrator only doing the epilogue. I've listened to Saskia Maarleveld before and thought she did a good job covering both the female and male voices.

Jamie Shaw Mayhem series is auto download for me. Of all the books this is my least favorite, but found it entertaining none-the-less. It has been a long dry spell in my opinion for audio books and I was beyond excited to listen to this story.

The premise of the story is that Hailley is from a farm ... is being educated by her uncle along with her cousin of the same age. Her cousin is a spoiled witcth who likes to lord her prosperous family over her near destitute cousin. Dannika (cousin) is attending school to try to win back her high school boyfriend who is an up and coming rock star. However, Mike finds that he is over his first love and attracted to her much nicer cousin. The angst begins.


I think Hailley is a typical twenty something college student ... her character reflects the innocence and life inexperience at that age which is why I found the "angst" a bit tedious in regard to her cousin. I would agree that under normal circumstances one would not "steal" a cousin's boyfriend. In this case however, I found myself routing for her to do it because she did not stand up for herself at any other point.

Mike is a lovable drummer .... I would have liked to have listened to more from his POV ...

I used a credit for this listen and do not regret it. I would recommend for a credit or sale.

I liked the story of Mike. The narrator had a nice voice but when she spoke for Mike she sounded like he was a boring monotone guy. I think it was still worth the credit though. It was a feel good series with a little heartache included.

A wonderful modern romance. One you just can't put down. You can't help but cheer for the underdog knowing it's got to work out.

This series is by far one of my favs. Havoc is a great romance.

Hayley is a kind-hearted person, but she has the devil on her shoulder aka Danica. She tries and tries to bring her down, but in all honesty, I believe she’s always been threatened by her. Cause Danica could never be anything like Hayley. Mike, the lone drummer who's been waiting for the perfect woman to come into his life. Who ends up finding it.

There were a lot of moments again, where I’m just yelling at Hayley. Like, don’t listen to your witch of a cousin. But what happens, in the end, is Justified. I don’t think I’ve ever hated a character as much as Danica. I love how Hayley and Mike came together. They were perfect for each other and all the obstacles they had to go through, were worth it.

Excellent ending just a bit to long and drawn out. Perfect narrations. Loved this series.

Love Me Some Mike

I was so glad Mike was the last story. He has a small piece of my heart. He's a rock star, but not your typical slut-boy rock star.

He loves his video games and is incredibly insightful. His high-school girlfriend, Danica broke his heart and but it didn't jade him. He knows he won't find his love in the groupie lines.

Re-enter Danica and her cousin Hailey. Danika is self absorbed and only wants Mike for his fame. I won't ruin the story line but Hailey, her cousin is Mike's perfect match. But Danika holds something over her head to keep her away from Mike.

Would you try another book written by Jamie Shaw or narrated by Saskia Maarleveld and Will Damron ?

I enjoyed the earlier books in the series - so yes. But if this was the first in the series I would not rush out to buy the next one. As for the narration, I thought they were both easy to listen to & I have enjoyed other audiobooks narrated by Saskia Maarleveld.

What could Jamie Shaw have done to make this a more enjoyable book for you?

Edited it down ... a lot. Saying the same thing, so many different ways gets kinda boring. Also, a big showdown might have made all my perseverance to finish the book worth it, but for all the angst in the story, I was actually quite surprised at how anticlimactic this book was.

There really isn't a scene that stands out for me. It was all a bit 'meh'.

Do you think Havoc needs a follow-up book? Why or why not?

Out of all 4 books this one is my favourite!!
It warms my heart and makes be smile like a goof!!

Didn't want it to end

This whole series was great and I couldn't stop listening to any of the books.
Heartfelt and feel good. Always finished each book with a smile