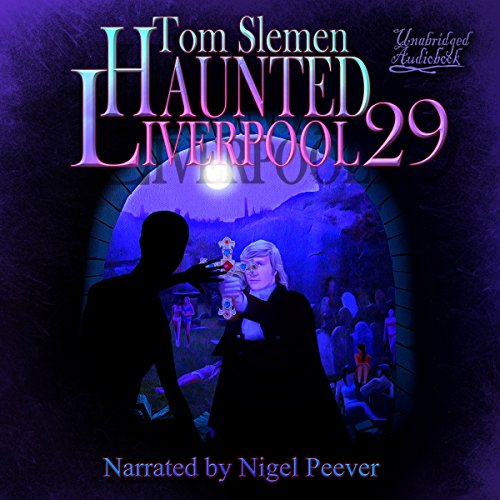 By: Tom Slemen
Narrated by: Nigel Peever
Try for $0.00

Welcome to Haunted Liverpool 29, another spine-chilling collection of stories by Tom Slemen, a writer who has gained a cult following across the world. In this collection of over 40 sinister yet fascinating tales, Tom Slemen will tell you about the strange Vampire Cult which promised Eternal Life - in exchange for your blood - and soul and of the two mysterious self-styled vampire hunters that took on the cult. You will also be chilled by the accounts of a creepy parasite known as the Grave Worm, which has left cemeteries to seek living flesh because of the rise in cremation.

In this incredible book, you will also hear about the pregnant New Age traveller who turned into a werewolf before the eyes of the shocked and terrified midwives and nurses of a maternity ward. You will be fascinated by the case of two lovers who had known each other over many lifetimes stretching back to the Dark Ages, and you will also be intrigued by the witch who was hounded by doctors because she kept on curing their patients with her white magic.

You will also be enthralled and baffled by the weird case of the warning emojis which foretold death and tragedy on a woman’s telephone, and you will be enchanted by the vengeful tale of the League of Blondes. You will be captivated by the account of a weird creature that lives in a well under a Liverpool theater, and you will be shocked by the woman who gave a psychopathic lady a lift home, unaware of the terrifying unimaginable ride of her life she was soon to endure....

In Haunted Liverpool 29, there are stories about time-slips, bizarre bogeymen, ghosts, vampires, werewolves, witches, doppelgangers, occultists, time travellers, shape-shifters, weird killers, creepy dolls, parallel worlds, and there is even an appearance by Jack the Ripper!

What listeners say about Haunted Liverpool 29


Tom Slemens Haunted Liverpool series has to most fascinating true paranormal stories that I have listened to. This is my first book in this series and will go back to the previous books to enjoy this series.

A great set of scary stories!

I was thoroughly creeped out by these stories! I am a huge fan of scary stories and have fallen in love with this book! The stories were great, but the narration by Nigel Peever and the sound effects truly brings these stories to life! It was so much fun to listen to and I would very quickly reccomend this book to people!

Horror stories that will leave a shiver up your spine

I love horror stories but these truly creep me out. They are well written and with the narration of Nigel Peever the stories truly come alive. I must admit though I could not turn it off I was totally honestly hooked. I loved the different descriptive stories each more creepy than the one before. If you love horror stories this is a do not miss series. I received this review copy at my request and I am glad I was introduced to this series. I am voluntarily leaving an honest review because I really enjoyed being scared.

I'm really enjoying this series. I've always enjoyed stories about the supernatural and these stories brings this home. There are a variety of dealings with the paranormal. They are well written and quite entertaining. The narration by Nigel Peever was superbly done. This is an enhanced audo book so if you don't care for that then pass this one up but I think Mr Peever does a wonderful job matching up sound effects to what he is reading. Not to mention his amazing ability to do so many distinct voices! Nigel Peever truly knows how to bring the stories to life and pull the listener into each scenario. I love this series and look forward to the next one!

37 Strange, Unusual and Eerie Tales to Thrill You


This is the 29th edition of the outstanding Haunted Liverpool series. It is filled with 37 fascinating, odd, unusual, eerie, strange and terrifying tales you will find no where else. More bang for your buck. Author Tom Slemen is a natural storyteller and truth is stranger than fiction. I will warn you that his books are highly addicting, once you've read one, you want more. I read this book using immersion reading while listening to the audiobook. The wonderful Nigel Peever ably guides you along. Another excellent edition of this famous series.

Great stories that are so beautifully narrated by Nigel.
It's clear that a great deal of work has gone into this and other books in this series that Nigel has narrated.
Excellent characterisations accompanied by relevant sound effects and mystical musical stings make this series of books compulsive listening.

Creepy tales told with enough authority to convince you that there is truth behind the stories.