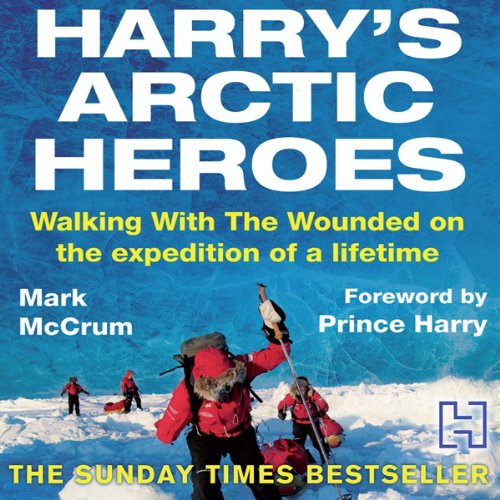 In April 2011, four soldiers - each a hero of recent conflicts who suffered devastating injuries in the line of duty - set out on a challenge that even an able-bodied athlete would balk at: a 200 mile trek, unsupported, to the North Pole. It was the culmination of a journey that began long before, when two friends decided to mount an expedition that would demonstrate how remarkable our armed forces are and raise funds for the rehabilitation of injured service men and women. Little did they know that their idea would ultimately gain global attention, and royal endorsement.

The year-long selection process was more physically and emotionally draining than anyone had anticipated. But by September 2010, the final team was set: the two founders, four wounded soldiers, a polar guide, and patron Prince Harry.

Once they'd ventured inside the Arctic Circle, they had to contend with new challenges, including pulling sleds weighing more than 100 kg over vast swathes of ice rubble, pressure ridges, and dangerous open water 'leads'; constant daylight; ground that could literally tear itself apart beneath them as they slept; and temperatures as low as -35 degrees. And all the time, they had to be alert for signs of the notoriously aggressive Polar Bears that roam the desolate landscape. With every step fraught with risk, the trek tested its participants' resilience to the limit.

Each of these brave men tells their story here, along with that of the extraordinary expedition itself - the rigorous training, the meticulous preparation, and of course, the final, awe-inspiring journey across the ice. They returned as heroes again - proof that strength of mind can be every bit as powerful as strength of body, and an inspiration to us all.

Harry's Arctic Heroes was previously published in audio as Walking with the Wounded.

What a fantastic undertaking! It started with two men with a mission to do something unusual for war damaged soldiers, primarily from the Afghanistan, that wasn't being done. So they came up with an idea and first discussed it with an experienced Norwegian guide who agreed to become involved, then there were backers needed as well as sponsors, and finally the military. That's just the beginning. There were difficulties with the military, grueling training, some medical issues (especially involving prosthetics), and a whole lot more. I snickered here and there about their expedition guide who thought little of the cold on his own account, only for others, because it was so like listening to Pop (true Norwegian) or to my husband who worked outside in Wisconsin winters. Absolutely astounding!
I understand that the BBC filmed and aired portions and that they are still available on YouTube. For me, I think that the book is better because it is basically comprised of the journals of all involved and more. The introduction is by fellow Afghanistan soldier Prince Harry.
Four men do the narration spectacularly.
Read the book. Donate to Walking With The Wounded. Please.
Americans might prefer The Wounded Warrior Foundation, in Australia the Bravery Trust, and in Canada there are several supportive organizations.