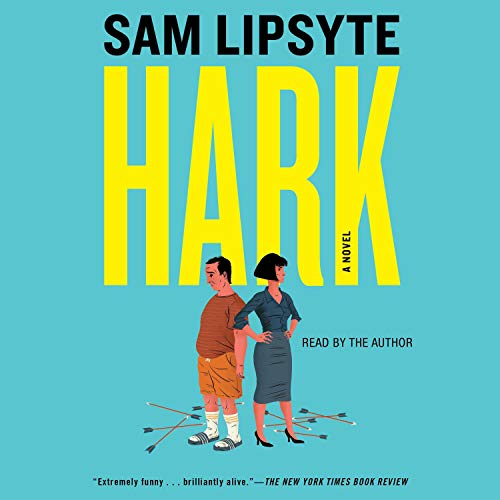 A brilliant send-up of our contemporary culture from Sam Lipsyte, the critically acclaimed author of Home Land, centered around an unwitting mindfulness guru and the phenomenon he initiates.

In an America convulsed by political upheaval, cultural discord, environmental collapse, and spiritual confusion, many folks are searching for peace, salvation, and - perhaps most immediately - just a little damn focus. Enter Hark Morner, an unwitting guru whose technique of "Mental Archery" - a combination of mindfulness, mythology, fake history, yoga, and, well, archery - is set to captivate the masses and raise him to near-messiah status. It’s a role he never asked for, and one he is woefully underprepared to take on. But his inner-circle of modern pilgrims have other plans, as do some suddenly powerful fringe players, including a renegade Ivy League ethicist, a gentle Swedish kidnapper, a crossbow-hunting veteran of jungle drug wars, a social media tycoon with an empire on the skids, and a mysteriously influential (but undeniably slimy) catfish.

In this social satire of the highest order, Sam Lipsyte, the New York Times best-seller and master of the form, reaches new peaks of daring in a novel that revels in contemporary absurdity and the wild poetry of everyday language while exploring the emotional truths of his characters. Hark is a smart, incisive look at men, women, and children seeking meaning and dignity in a chaotic, ridiculous, and often dangerous world.

What listeners say about Hark

Hark is a laugh out loud funny and razor sharp take on contemporary life that satirizes the way we live now and examines the profound and ridiculous ways we deceive ourselves into believing the b.s.

after 10 chapters I connected with nobody

I gave the book an hours worth of time, but everybody was so full of themselves I had to quit.

A few laughs along the way

But not sure what the point of this story is. Maybe that is the point. If you are partially through this book and wondering whether it will come togehter it won't. Just move on.

Hysterical every page, disappointing in plot

Before I started reading this one, I thought of Sam Lipsyte as possibly the funniest novelist writing today. (And that’s in a universe that includes Gary Shteyngart).

After reading it, I feel the same way, even though I think this one is a bit of a disappointment.

Page for page, this is hysterical. Lipsyte has a capacity for deadpan observation, for making the everyday miseries of life turn into humor, that never fails.

Here are a couple gems: At one point, our protagonist Fraz, who’s married to a woman most people recognize as out of his league, meditates on his place in her advice. As Lipsyte puts it, “His wife told him that life was not a zero-sum game, but he suspected he was the zero-sum if it was.”

In another, reflecting on some latter-day hippies, he observes they were on “the right side of history but the wrong side of glamour.”

The heart of Lipsyte’s description deals with Hark, himself, a guru who proposes a self-help program built around the concept of “mental archery.” The concept is at the perfect intersection of plausible and goofy, and Lipsyte runs on with it brilliantly. Even knowing it for a joke, I imagined taking focus from it, and then I laughed all the harder at the cleverness of the construct.

The trouble here, though, is that for all the humor and for all the brilliance of the situation – the hapless Fraz becomes an early Hark acolyte and leader in the cult of personality growing around him – there’s a limited central story. Hark is who he is, a finished product. And Fraz is a Schlub, but he’s a schlub who’s landed in enough clover to make his sad-sack experiences less interesting that in the even funnier and stronger The Ask, Lipsyte’s last novel.

I enjoyed the first half of this immensely, watching all the descriptions unfold. Then, as the second half took place, I found too much of the plot contrived. [SPOILER] Does Fraz’s daughter really need to fall into a coma? Does his wife really need to sleep around with his sleazy one-time best friend?

And then, while I continued to enjoy the language and inventiveness of the narrative, I found the end especially flat. [DOUBLE SPOILER] Lipsyte kills off Hark (in what I acknowledge, again, is a funny scene involving an actual arrow) because he seems to run out of things to do with him. And then, in the closing pages, he has Hark appear to various characters of the novel as a Christ-figure, as someone greeting the soon-to-be-dead to a kind of heaven. I get that it’s ironic, and I get that it comes as a kind of critique of the almost ubiquitous Christ-trope (as in Harry Potter, the Marvel Cinematic Universe, and many other places) – and I love the quick note that Fraz, as a Jew, is barred from heaven because “there are rules, of course” – but it seems an ultimate failure of imagination to travel so worn a path.

So, I simultaneously recommend this one and urge caution. And I leave it with the renewed sense that Sam Lipsyte is probably the number one writer I’d want the chance to sit down and have dinner with.

Waste of time I'll never get back! I tried for 0-neg stars but this wasn't allowed!

Wanted Comedy - Wasn't what I Needed

Great writing and I would enjoy this reading versus listening. I think the author should have used another person to narrate this book. The book fell flat and didn't deliver laughs for me. Dark, dry humor.

Least Favorite Read in a While

Why did I dislike this book? Let me count the ways...

1. This was, at best a short story hidden in a novel with a lot of unnecessary dialog.
2. Speaking of dialog, it felt like Lipsyte was trying to channel Aaron Sorkin with quick-paced witty dialog. It did not work.
3. The audiobook was read by the author. Big mistake. A good reader makes all the difference. Lipsyte's vocal qualities just don't add up. His lack of voices made it near impossible to follow who was speaking in large segments of dialog.
4. I can't remember a single thing about this novel and I just finished it. That tells you something.