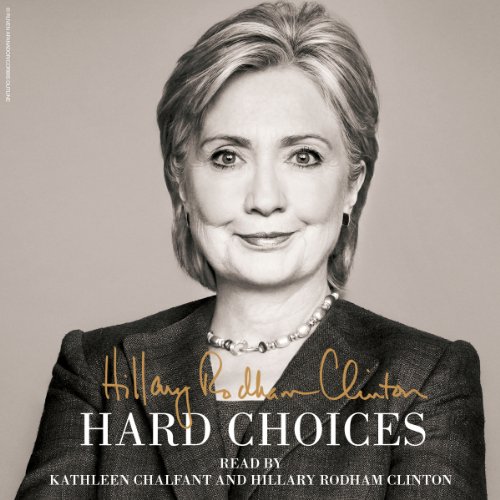 Hillary Rodham Clinton's inside account of the crises, choices, and challenges she faced during her four years as America's 67th Secretary of State, and how those experiences drive her view of the future.

In the aftermath of her 2008 presidential run, she expected to return to representing New York in the United States Senate. To her surprise, her former rival for the Democratic Party nomination, newly elected President Barack Obama, asked her to serve in his administration as Secretary of State. This memoir is the story of the four extraordinary and historic years that followed, and the hard choices that she and her colleagues confronted.

Secretary Clinton and President Obama had to decide how to repair fractured alliances, wind down two wars, and address a global financial crisis. They faced a rising competitor in China, growing threats from Iran and North Korea, and revolutions across the Middle East. Along the way, they grappled with some of the toughest dilemmas of US foreign policy, especially the decision to send Americans into harm's way, from Afghanistan to Libya to the hunt for Osama bin Laden.

Drawing on conversations with numerous leaders and experts, Secretary Clinton offers her views on what it will take for the United States to compete and thrive in an interdependent world. She makes a passionate case for human rights and the full participation in society of women, youth, and LGBT people. An astute eyewitness to decades of social change, she distinguishes the trendlines from the headlines and describes the progress occurring throughout the world, day after day.

Secretary Clinton's descriptions of diplomatic conversations at the highest levels offer listeners a master class in international relations, as does her analysis of how we can best use "smart power" to deliver security and prosperity in a rapidly changing world - one in which America remains the indispensable nation.

What listeners say about Hard Choices

A piece of history

I loved this book. Kathleen Chalfant ought to get an award for pronouncing some very hard names and places!
I feel very confident that Hillary is the best choice to lead our country in 2016 and get so much accomplished.

The most qualified individual to be President

She was extraordinary as Secretary of State, I can only dream of where this country would be if only we were in her second term. Thank you Madam Secretary, your books have given me peace during these devastating times. This book is a detailed review of her time as Sec. of State and insight to her strength, intellect, and convictions. She is a true patriot and her undying commitment to her country is inspiring!

They skip many parts of the book!

When I was listening the audiobook and reading the book at the same time to practice my English I realized they skipped many parts of the books! Disappointing...

Loved the story but not the narration.

I wish Hillary Clinton had narrated the whole book. I was not impressed with this narrator. Not that she did anything wrong I just expect to hear Hillary's voice

I thought this book would show Hillary from a more emotional, "human" perspective. Although I was looking forward to getting to know her inner world a little better, I absolutely loved where she went with the book.

It's basically a report of what she did at the State Department. She explains some of her moves and decisions, and gives some insight into how difficult and double sided many situations are. No easy choices to make.

She also goes through different regions and countries and explains where they are politically and financially. His was very interesting!

This book gave me even more confidence that she will ROCK as a president. Someone that can balance these very complicated relationships around the world, can do anything.

It gave me much more admiration for everything she has done. She is an incredibly smart woman. She gets things done. She doesn't sit around. And she cares about the world becoming a better place.

I couldn't stop listening. Loved it!

It depends on what side you're on.

While I believe that Hillary Clinton is genuinely trying her best, she is still brainwashed by the "American" model on how every country should operate. And she explains that as a Secretary of State she visited many country's and their leaders, trying to force as much as possible her biased viewpoint upon them. As an excellent politician she is very convincing and knows more tricks than most people on how to pull others on her side. A well meaning woman who has not understood other cultures and traditions.

This book gives perspective to all of the media hype about Hillary. I respect her!