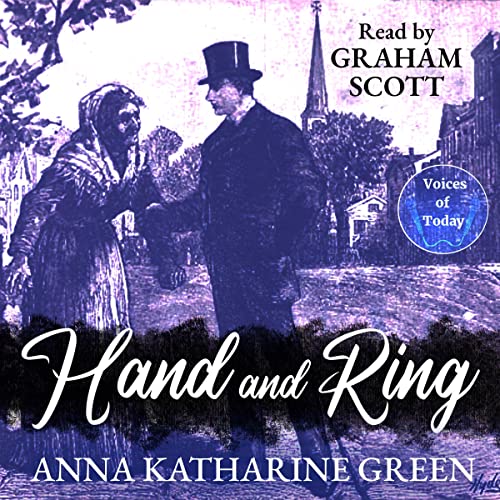 By: Anna Katharine Green
Narrated by: Graham Scott
Try for $0.00

Anna Katharine Green (1846-1935) was a pioneering novelist in the detective genre, writing well-plotted procedural stories. Hand and Ring is the fourth of her novels featuring Mr. Gryce of the New York Detective Service.

In the pretty little town of Sibley, NY, the court has adjourned for lunch, and Judge Evans and some of the leading lawyers of the district stand outside the courthouse discussing the limitations of the criminal classes. A stranger describes to them just how a man might commit a murder and avoid detection - and only minutes later, the widow Clemmens is discovered struck down in her parlor by an unknown hand in circumstances eerily similar to those described by the stranger.

The investigation that follows sees first one suspect emerge, and then another, as dramatic courtroom scenes and dogged investigation by two disciples of the famous Mr. Gryce combine to navigate the maze of circumstantial evidence, suspicion, secrets, and red herrings to reveal the shocking truth.

What listeners say about Hand and Ring