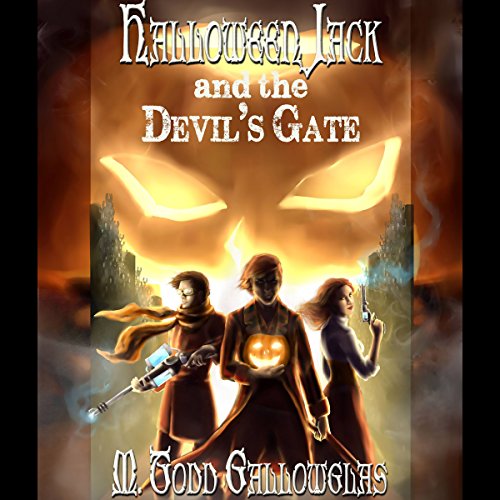 Halloween Jack and the Devil's Gate

Halloween Jack and the Devil's Gate

The Devil's Gate, the looming barrier that keeps the demons and nightmares at bay every night of the year except for Halloween, comes crashing down. An army of steam-powered automatons, led by the Devil himself, finally gets the better of Jack of the Lantern, the man who tricked the Devil and gave us the jack o' lantern for protection on the darkest night of the year. With their steam-powered soldiers, the demons no longer fear Jack of the Lantern as they pour out in to the world to get into whatever mischief they desire.

Even though his parents raised him with stories and old traditions of Ireland, John O'Brien never truly believed, especially not old Jack of the Lantern. One Halloween night, John learns the truth when the demons come for him, leading an army of steam-powered soldiers. With the help of his cousins, Moira O'Neil, heiress to the special ritual that keeps the Devil's Gate closed, and Daniel McRory the inventor, John must take up the mantle of Jack of the Lantern and create a new legend great enough, terrible enough, to scare the Dark Lord and his dark legions back into their dark realm. He must become Halloween Jack.

The Halloween Jack books are part swashbuckling adventure, part steampunk fantasy, which twist and turn the traditions of old tales and legends upside down and inside out. If you enjoy a rollicking tale with clever and cunning heroes, Halloween Jack and his friends are heroes for you!

The author may not be the best narrator in the world, but he did an amazing thing in making this story come to life and taking the time to bring it to audio himself. I have immense respect for the efforts it must have taken to bring this book to publication on his own, well done. the story was very fun, very quick-paced, and well worth the time and money.

M. Todd Gallowglas is a genius. I love his imagination in this story. it takes the Halloween story and kicks it up to a whole new level.

Loved the Audible version! I can't wait till the next one comes out on audible! I do a lot of driving. listening to this book has turned my mundane drive into something I look forward to.

An interesting take on a classic Halloween story

The performance was great and the story was ok. The wording chosen to describe the environment and characters could have been improved to draw the reader into the world more by describing the world in language more like what people of the time would have used. For example the main characters instantly knew what the tin solders/steam robots were even though they had never seen them before. It could have been more interesting to lead the reader along the discovery.

In the end, I found the story interesting and with the performance would consider future books in the series when Halloween season is in the air.

Halloween Jack is a charming tale told in the tradition of the myths and fairytales I loved as a kid--with a bit of steampunk thrown in. It focuses on three cousins with each their own unique talents, who must work together to close the Devil's Gate and send the Devil and his minions back to Hell. It's a quick-moving story (even literally leaping across the ocean at one point), with enough plot twists and turns to satisfy any desire for excitement.

The author narrates his own story and does a fantastic job, supplying each character with his or her own voice, and reading out the sound effects with a storyteller's flair.

I love Halloween. I love the history, I love the folklore, decorations, costumes and most anything related to Halloween. I also love epic tales of fantasy where an eccentric cast of characters must come together to fight the good fight. Halloween Jack has all of these elements - cool Irish and American folklore, a delicate pact made between good and evil and eventually a steam punk inspired tale of swashbuckling adventure. Sadly these elements alone do not make a good story. Many times during the narrative I would sit there wondering why or how a character would do such a thing. How does a character who previously did not believe in fairy tales suddenly become an expert in outwitting the devil himself? Why would the denizen of hell fear any mortal man? Questions such as these plagued the entire narrative for me, ultimately preventing me from sinking into the story. I really wanted this book to be something special - after all the number of Halloween inspired tales are few and far between. Too bad it didn't pan out that way.