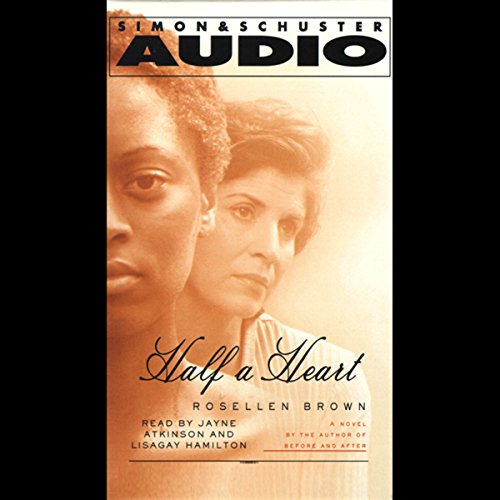 By: Rosellen Brown
Narrated by: Jayne Atkinson,LisaGay Hamilton
Try for $0.00

Rosellen Brown's extraordinary new novel, Half a Heart, tells the story of a former civil rights activist, Miriam Vener, who feels trapped in the comfortable white upper-middle-class life she leads with her family in Houston in the 1980's. That life suddenly shatters with the appearance, after almost 18 years, of Veronica (Ronnee), her biracial daughter, born of Miriam's passionate affair a generation ago with Eljay, a brilliant black professor at a Mississippi college, who has raised the child ever since. When Miriam introduces her daughter to the utterly white New England town where she summers, and to the Houston society which represents the compromise of her sixties ideals, the results are complicated: What claim does Miriam have on Ronnee after all this time, and what does Ronnee want of her mother now?

Ronnee wrestles with her fury at her mother's mysterious disappearance from her life. With which family -- and which race -- does Ronnee identify?

Half a Heart is a profoundly moving story about estrangement and intimacy, race and privilege, identity and belonging.

What listeners say about Half a Heart