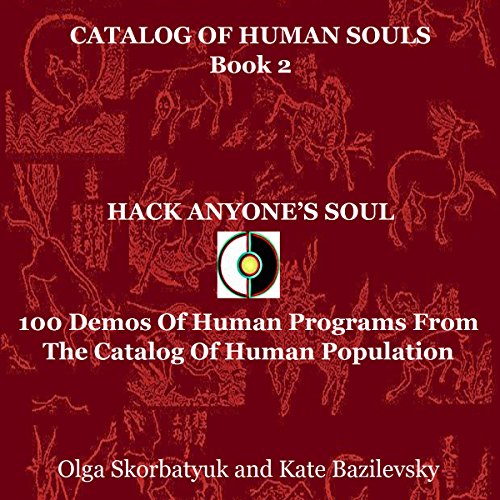 Hack Anyone's Soul: 100 Demos of Human Programs from the Catalog of Human Population

By: Olga Skorbatyuk,Kate Bazilevsky
Narrated by: Philip Benoit
Try for $0.00

The main segment of the structure of Homo sapiens' psyche is an individual program with which a person is born. Knowledge of the natural human program allows you to find out what a person is like without masks (real), the true motives that drive him, what he is hiding, and what he really wants. This is called "hacking the soul". Other types of "hacking" are children's toys, so to speak, "for the poor".

We understand that you have been dreaming of such a tool for "hacking"; however, the fact that this tool became available also means that now anyone can hack your soul (psyche) as well. Your soul is now public domain; or, to be more precise, it is a public place that anyone can enter without invitation and without your permission.

You think that this is impossible and that it is nothing more than another horoscope? Well, well. It is characteristic of a human to draw conclusions according to the principle of an analogy when the conclusion about an object gets built on the basis of its similarity to another object. In itself this method of learning about the world is not bad, but in some situations, such as this one, it does not work. The reason is that in this civilization, there is nothing equivalent, of equal value, or similar to the ancient source of knowledge, which turned out to be the Catalog of human population. Due to this, probably, it is pointless to try to compare the Catalog to something familiar.

Another question is that fans of horoscopes could draw a different parallel and, for example, compare the Catalog of human population to encyclopedias about animals or plants; the periodic table, which describes the chemical elements; or an anatomical atlas. However, such comparisons usually do not come to the minds of average people, as they are not familiar with the periodic table and anatomical atlases, do not study encyclopedias of plants and animals, and are familiar with horoscopes and psychological descriptions only from popular glossy magazines.

What listeners say about Hack Anyone's Soul: 100 Demos of Human Programs from the Catalog of Human Population