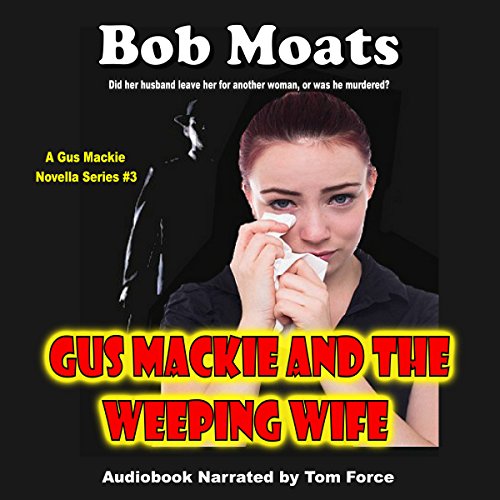 Gus Mackie and the Weeping Wife

By: Bob Moats
Narrated by: Tom Force
Free with a 30-day trial

It was time for Gus to move to a better office and out of a slum area in Detroit. Police homicide detective Bernie Longmire, and Angela, Gus' daughter, agree to help him move into his new office. Going back to the old office to get ready to move, they find a woman crying at Gus' door. She has a problem: She doesn't know where her husband is at. Did he run off with another woman or is he dead in a shallow grave? They were able to get the story from her despite all the crying she was doing, and Gus took the case.

After a quick move of Gus' meager belongings, he and Bernie go after the first possibility - was the missing man murdered? They talked to a co-worker of the missing man and got the name of someone who was threatening him. They go to talk to the suspect and end up having to break up a domestic fight and then find out the suspect may have an alibi. Gus goes out on his own and finds a place where the missing man could be hiding, and why he was hiding. He travels to northern Michigan and discovers a dark secret involving the man, his wife, and their family.

This is the third novella in the Gus Mackie series.

What listeners say about Gus Mackie and the Weeping Wife