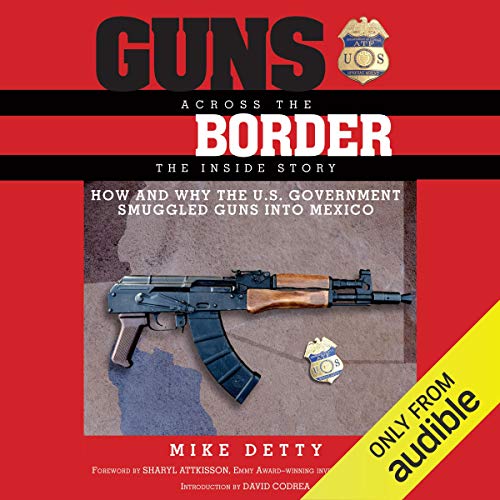 Guns Across the Border

By: Mike Detty
Narrated by: Thomas Stephen Jr.
Try for $0.00

The true and shocking story of an undercover smuggling operation.

Conducted under the umbrella of Project Gunrunner, intended to stem the flow of firearms to Mexico, the Bureau of Alcohol, Tobacco, Firearms, and Explosives (ATF) ran a series of “gun walking” sting operations, including Operations Wide Receiver and Operation Fast & Furious. The government allowed licensed gun dealers to sell weapons to illegal straw buyers so that they could continue to track the firearms as they were transferred to higher-level traffickers and key figures in Mexican cartels.

Motivated by a sense of patriotic duty, Tucson gun dealer and author Mike Detty alerted the local ATF office when he was first approached by suspected cartel associates. Detty made the commitment and assumed the risks involved to help the feds make their case, often selling guns to these thugs from his home in the dead of night. Originally informed that the investigation would last just weeks, Detty’s undercover involvement in Operation Wide Receiver, the precursor to Operation Fast & Furious, which was by far the largest “gun walking” probe, stretched on for an astonishing and dangerous three years.

Though the case took several twists and turns, perhaps the cruelest turn was his betrayal by the very agency he risked everything to help.

What listeners say about Guns Across the Border

An ABSOLUTE MUST READ!

This is a must listen/read. Absolutely riveting, great insight into just how corrupt the Obama administration and its appointees were. In my opinion the ATF were bigger crooks than the people they were busting all in an effort to take away my, YOUR, 2nd Amendment GOD given right.

Exceptional story, a twist ending and Its true.

The storytelling, as written by the person whom experienced it, is well written and exceptionally detailed. The end of the story comes as a bit of a twist and leaves you thinking well no duh! 🙄

Yet another reason not to trust the government

This book outlines how a gun dealer tried to assist the ATF to prevent guns from ending up in the hands of the Mexican cartels. It’s a sad story of ATF incompetence and makes a strong argument to distrust the government.

This is an easy listener. If I was reading it, I would’ve had a hard time putting it down. The story flows nicely, detailed, but not overbearing with backstory, which my ADD appreciates. Unfortunately, there are no surprises at the end, which is the real tragedy.

Loved it, finished it quickly and then listen to certain over again.
author was ok.

Misuse of guns & the sales of guns to criminals

I enjoyed the description of the events, the book does a very good job of building a mental picture of situation described. Provides insight into the criminals and their activities in the southern US and Mexico.

Mike Detty is a true American Patriot. This is a great book and everyone needs to listen to his story!