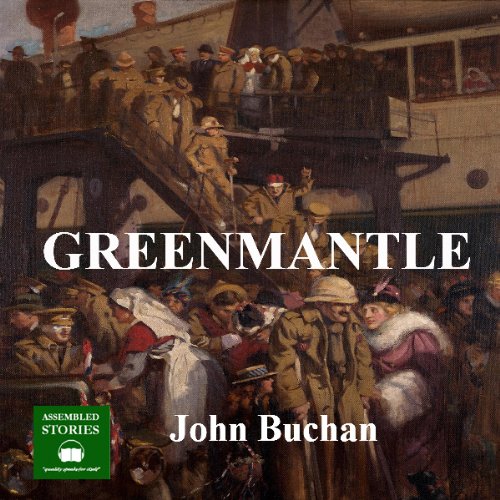 By: John Buchan
Narrated by: Peter Joyce
Try for $0.00

The second of Richard Hannay's adventures takes him from the trenches of the First World War on a mission of vital importance to the British campaign in the East. In an attempt to manipulate their Turkish allies the Germans have created a religious figurehead, a prophet of a new order to unify the disparate tribes of Asia and crush the allied offensive. Pursued by the barbaric General Stumm, Hannay and his old South African friend and teacher Peter Pienaar with fellow soldier Sandy Arbuthnot and American engineer and less than ‘nootral’ John S. Blenkiron make their different ways to Constantinople to find the elusive Greenmantle and do what they can to avert disaster.

But who is Greenmantle and what dastardly part has the sinister fanatic Hilda von Einem to play in the game which will determine the outcome of the war. Packed with incident and incredible feats of derring-do the story culminates at the offensive. Buchan’s life in politics and his work for the Intelligence Corps gave him knowledge and an insight that few others could have at the time. With remarkable prescience he reveals the main theme and keeps the attention to the last.

About Assembled Stories: Over the years the national press have reviewed Assembled Stories titles as ‘excellent’, ‘remarkable’, ‘entrancing’, ‘superb’, ‘magic for sure’, ‘masterly’, ‘wonderful’, ‘a class act’ and ‘a splendid example of audio at its best’.

What listeners say about Greenmantle

Drags a bit in the middle

Whilst a jolly romp happy coincidences take away from the plausibility Bd it drags in the middle.

This is the second in the series and a great second act. An action story the gas some basis in truth.

Would you listen to Greenmantle again? Why?

Yes. I have listened more than twice.

What other book might you compare Greenmantle to and why?

The Thirty Nine Steps. It's the first book in the Hannay series.

What does Peter Joyce bring to the story that you wouldn’t experience if you just read the book?

Joyce gives good voice to a story written in first place. And growing up in the days of black and white movies and radio drama I can see in my mind what I am listening to.

A spy and his friends. A woman whose lures cannot be denied. A villain to. flee from. A War to End all War's.

I've always loved radio drama. Closing my eyes and just listening and imagining the sights that go with the sound.

Not as good as the first book

I didn't like this book in the series(book 2) vs book 1. The story of greenmantle for me just wasn't very interesting. The narrarator was excellent though.

I was really unsure about this one.

I love John Buchan and particularly the BBC Drama production of The Thirty-Nine Steps starring Tom Baker (available on Audible) but having it read to me by one person seemed to be a second-rate affair.

Peter Joyce portrays the cast well and his range of accents are convincing and different enough to avoid confusion.

The sound quality is good - at the beginning of the book, 'side 1' is announced so I can only assume that this production has been remastered from tape.

The story is typical Buchan - wild and fanciful and very much using language and terms that shouldn't be used today, but as this was published in 1916, we can forgive the author.

The plot has winds and twists and gets a little odd towards the end. It's not as clean as the Thirty-Nine Steps but is thoroughly enjoyable and the next step along the road for our here, Richard Hannay.

Will try Mr Standfast next....

Buchan at his Best

Greenmantle was one of my favourite books in my youth, and this evokes such wonderful memories

The commentary and characterisations are excellent, giving greater depth to this stirring novel

The best known of John Buchanan's books is the Thirty Nine Steps. The best of his novels is Greenmantle. The heroic loyalty and goo-humoured courage is of another era, but so very refreshing in today's climate. In the genre of the Clubland Heroes spanning from the Scarlet Pimpernel, to Bulldog Drummond, the Saint, James Bond and arguably George Smiley, the adventures of Richard Hannah are exhilarating, straightforward and nostalgic, filled with the hope, heroism and British values that leave us wistful in our egotistical modern age. But with all of that, Greenmantle is a great book, based on a theme that is strangely modern given the current wave of twenty-first century terrorism. A book that can be read and re-read, or listened to, many times with its wonderful array of memorable characters, including the chilling Madam Von Einem. Mad and bad she may have been, but also she was great!

This has been digitised from a record and done at too higher volume.it’s distortion is unbearable I would like my money back.

If you enjoyed the 39 steps - dont read this

What could John Buchan have done to make this a more enjoyable book for you?

Thought of a new plot

Could you see Greenmantle: A Richard Hannay Thriller, Book 2 being made into a movie or a TV series? Who would the stars be?

dont know but I;m not sure that I would watch - it would need a lot of screenplay work to make it a thriller

Unbearable because of narrator's Afrikaaner accent

I found it impossible to listen to huge swathes of this story because of the harsh 'Afrikaaner' accent that the narrator assumed for one of the characters. It was truly unbearable.