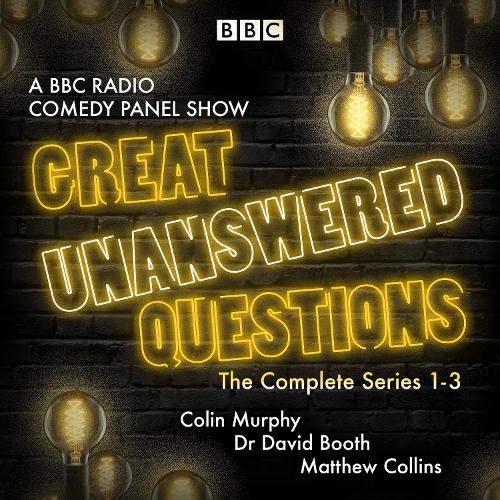 What do you get if you put a comedian, a scientist and an internet expert in a room together? The answer is Great Unanswered Questions, a panel game in which resident funnyman Colin Murphy teams up with brainiac Dr David Booth and computer geek Matthew Collins to tackle ludicrous questions and provide the correct (or at least the funniest) answers.

Each show features a guest comedian, and as Colin presents them with a quirky query to riff on, David attempts to offer some sense amidst the nonsense. Meanwhile, Matthew trawls the world wide web to find interesting and illuminating content and add some facts to the fun.

Could pigs fly? Which wakes up first - you or your eyes? Why do pizzas come in a square box? How much fat do you need to become bullet-proof? And does each of us have the potential to be a bright sparkling diamond

Among the comics answering the unanswerable are Jo Caulfield, Phill Jupitus, Dara O'Briain, Ardal O'Hanlon, Jason Manford and Holly Walsh. And in a special Edinburgh Festival show, Andrew Maxwell joins the team to inform, educate and entertain. You may not get the answers you were expecting, but you'll certainly have a few laughs....