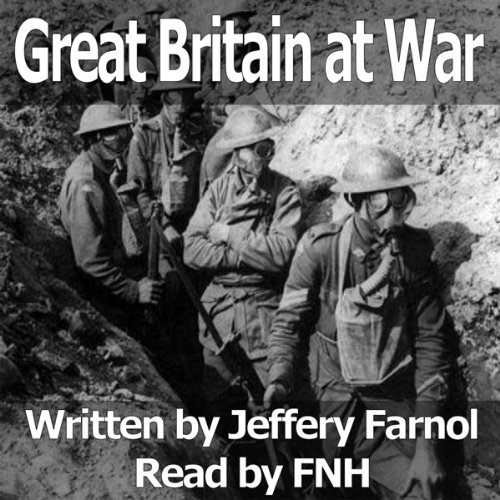 By: Jeffery Farnol
Narrated by: Felbrigg Napoleon Herriot
Free with a 30-day trial

FNH Audio presents a complete and unabridged audio edition of a book published in 1917 at the height of the First World War. The author, Jeffery Farnol, is better known for his works of romantic fiction, but in this departure, Jeffery recites the events, observations, and anecdotes of his tour of Great Britain's war effort. The book follows Jeffery as he visits a number of key locations around Britain and on the continent, each demonstrating how members of English society have come together to work towards the goal of "defeating the hun".

On a visit to a naval dockyard, he reports on how the ships are being constructed, takes us on a tour of a destroyer, and introduces us to the crew. He also visits a machine gun factory, and discovers how the great guns are built. His tour continues onto the continent, where he visits a hospital, a training camp, and artillery battery at the front in action. While in France, he discovers the horrors of war, learning that it's more than just guns and glory; there's blood and death close at hand. A visit to an active aerodrome shows us the newly arrived aircraft, and from the people there, we learn of their daring in combat. Finally, the tour draws to an end at Ypres, known simply as "wipers" to the troops - a place of great history and architecture now turned to ashes and rubble. Yet despite the destruction, the author finds glory, honour, and even hope for a better future. This is a fascinating insight into Britain during the peak years of the World War I effort.

What listeners say about Great Britain at War

Great Britain at War - essays from home and battle

Great Britain at War is a series of short observations from the homefront and the battlefield. Fascinating, thoughtful, hopeful. It is a wonderful short read...

The description of the book states that the author is better known for his romantic fiction. It is a shame he tried to branch out. Written like a Victorian fiction, this book tries but fails as a book of the history of WWI. The flowery Victorian English used is more distracting than literary. Disappointing!