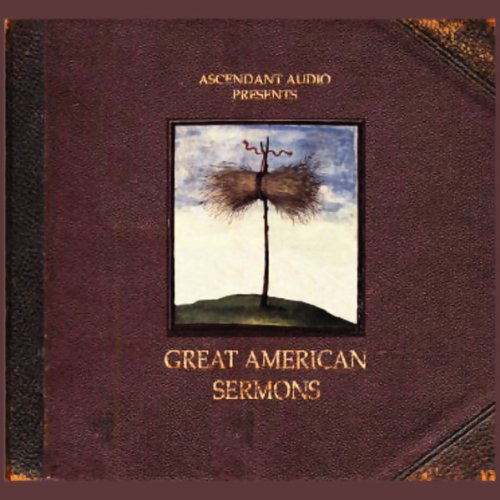 Essential listening for understanding the development of religious thought in America...or for just hearing a rousing good sermon! Dynamic performances bring these classic pieces of Americana to life!

Included in this audiobook:

"A Sermon In Praise of Swearing" by Anonymous; "Sinners in the Hands of an Angry God" by Jonathan Edwards; "A Sermon of War" by Theodore Parker; "Uses and Abuses of the Bible" by Lucretia Mott; "On Being Born Again" by Dwight Moody; and "The Dogma of Hell" by Octavius Frothingham.

An unworkable, contradictory mix of sermons,

I suppose the premise of this book was to put together a mix of some of the sermons that have had an impact at certain moments of United States history. This is the only level that the collection might conceivably work at. Not being an American myself, I cannot say for sure whether it works even at that level.

I want to say this graciously, as I have every respect for the Quakers and Unitarians I personally know, but to place Jonathan Edwards and Dwight L Moody together with two Quaker sermons and two Unitarian sermons seems to me to be an attempt to pull Baptists and Calvinist Evangelical believers into listening to anti-Trinitarian material which we are unlikely to find much ground of agreement with.

I did not realise that this collection was going to put Moody and Edwards into such company. That was the first surprise.

I understand that Quakers and Unitarians did have a role in US history. Their number today seems to me to be tiny in comparison with the Trinitarian branches of Protestantism. I think some Quakers are also Trinitarians, but not the ones in this collection it appears. And as far as the allotted time is concerned you have less than one third and more like a quarter of the whole for Moody. The vast majority of the material here therefore reflects what only a small minority of Protestants believe, and for those who purchase this for the Edwards or the Moody, you will find three quarters of it not to your taste at all, but rather contradictory to it.

Especially pernicious is the way they place Edwards and Moody in 2nd and 5th position out of six sermons, and in the ones around them place other sermons which entirely contradict the things said by Edwards or Moody. The final sermon by Octavious Frothingham attempts (with no actual verses from the Bible, of course, but an earlier sermon by Lucinda Mott already put paid to the need to do that) to debunk what he calls the "dogma" of hell. It is almost like the author of the collection means to get the Evangelicals and/or seekers concerned with the issue of hell by means of the Edwards sermon and then turn that into a dead virus, in order to inoculate the hearer against conviction, by the last one. Very disingenuous.

Not sure who Ascendant Audio are, who produced the collection - the name googles to a producer of loudspeakers which is presumably unrelated, and who these people are I cannot see, but the name once again suggests that they are transcendentalists, looking for converts from mainstream Protestantism.

I am also far from sure that the Moody sermons was not cut in a perverse way also. Even Moody does not seem to get to the point where he is showing the way of salvation in Jesus. It seems to be part of a sermon in which he is more concerned with railing against alcoholism, something Quakers would no doubt approve of, but doesn't get to the message of redemption, doesn't show how a person could be rescued by Jesus from this state. Knowing Moody, he probably did get on to that, but it certainly was not in this sermon. And that was the second surprise. There is a lot of politics on the collection, a lot of idiosyncrasy, self-help, etc not very much Gospel, even in the Edwards clip, which in the context is I would say perverted.

If you would like to be brought to the foot of Calvary and gaze upon the wonder of your creator and redeemer giving His all to save you, then this is not the place that you will find such a vista.

I could pick six sermons which would give far greater glory to our glorious Lord than these do.

If you are looking for some good Evangelical Christian listening there is a lot better here on Audible. If you are looking for "Sinners in the Hands of an Angry God" there are about six other readings on Audible, and both the preview of the voice and the reviews will guide you well. I picked this one to get more material out of one credit, and because it did not yet have a review. Well, it has one now.