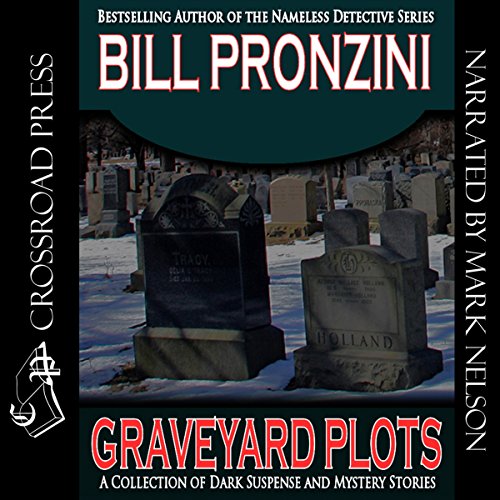 By: Bill Pronzini
Narrated by: Mark Douglas Nelson
Try for $0.00

Twenty-three of Shamus Award-winning author Bill Pronzini's stories, all of which display his versatility, his clean, crisp narrative style, and his keen awareness of detail. These tales, including three that feature his well-known series chararacter, the "Nameless Detective", run the gamut from psychological suspense ("Strangers in the Fog") to satire ("A Craving for Originality") to Western gothic ("The Hanging Man" and "His Name was Legion").

Of special note, "Proof of Guilt" is a dandy murder-in-a-locked-room puzzle; "Multiples" (written with Barry N. Malzberg) is an intriguing literary exercise about a man who can't decide whether to kill his wife or simply write about it; "Rebound" is a solid character piece about a washed-up reporter stalking a once-great basketball player; and "Peekaboo", about the lone tenant in a large, eerie house, has an ending that will make readers jump.

This will be a Crossroad Press production.

What listeners say about Graveyard Plots

Well-written, holds your attention throughout all of the short stories.

Pronzini is an old pro who always delivers. This collection is no different. If you like Pronzini's work, you'll want to read this. If you are new to his work, this might be a good place to start.

What other book might you compare Graveyard Plots to and why?

Bill Pronzini is the master of short stories.

excellent short stories. Cant get enough of them.

Another Audible book from Bill Pronzini and another collection of short stories, his best ones apparently - 23 in all.

The books comprises the following.....

The introduction advises that the stories in the collection date from the late 60s to the mid-80s when the set was originally published, several of them were award winners.

A few weeks on, I'd struggle to remember all of them from title alone, but most of them kept me amused while I listened to them. Pronzini's prose is usually quite straightforward and there's nothing ever really left open to reader interpretation as to the outcome. They are pretty definitive in their endings.

Some of the stories had been encountered before in other collections from him, but I was happy enough to hear them again. We have different genres covered with Western as well as mystery.

Two Weeks Every Summer was my favourite. Guys chatting about their forthcoming vactions with two in particular letting off steam for two weeks every year, after suppressing their true selves for the previous fifty. It does make you wonder about how well you truly know people.

I also enjoyed the Nameless tales and they reminded me that I should really get back to the series which I abandoned about six years ago. (Not because I wasn't vibing the books.)

Nearly nine hours of enjoyment to keep me amused during the workday and some everyday solitary tasks which didn't need 100% concentration.