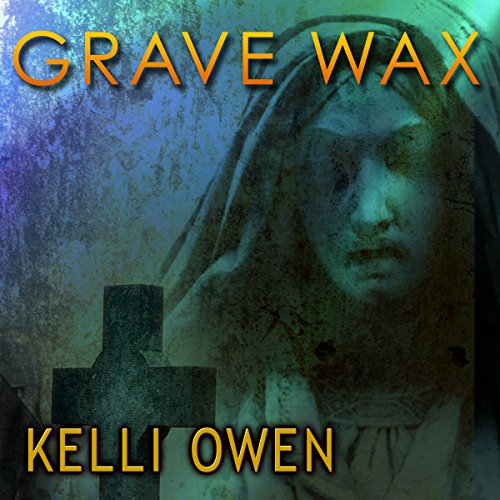 George Morey would do anything to save his wife from certain death and has tried every treatment known, from chemical to homeopathic to prayer - all to no avail.

So when the local witch requests unique ingredients from the town's gravedigger, George complies without question - willing to sacrifice his own past to secure a future with the woman he loves...more than life itself.

Such a twisted love story. Not only is it twisted, the story itself takes you for a nice twisty ride. The love story is a fairly common one but this adaptation of it is quite unique. Wasn’t really expecting how any of it was going to play out and was pleasantly surprised. The main difference in this one is I actually cared for the characters and was quite happy with how everything worked out. For being such a short story, perfect length though, this really tells a bigger story.
The story takes place in a cemetery and is spent with dialogue back and forth between a retiring grave digger and his younger apprentice. Steve White does a great job with this narration and really puts you right there with the two men as they discuss the job and their life. His character voices were great and there is a good chance that I will revisit this story.
I was voluntarily provided this free review copy audiobook by the author, narrator, or publisher.

This was not what I expected. To be honest, when I heard the name of the book, and saw the cover I thought it was going to be a book of short stories by Kelli Owen. It's not, instead, it is a full story that centers on a grave digger, who has lost his wife, and is grieving for her terribly. He tries to live his life without her, but they were so intermingled that it is sort of like him losing half of his body.

As a funeral director I see this all the time, and can tell you that I have literally seen people will themselves to death when their significant other dies. What the protagonist goes through in this tale is real, and very genuine. I really applaud Owen's ability to give some gravitas to the character, and make you feel empathy towrds him.

I like both the Title of the book, and the cover. The title carries a double significance; one because the grave wax is actually used in the story, and two because it lets you know that this is not he quite and happy elf tale from Lemony Snicket (sorry, I have kids). The cover is important because the majority of the story takes place in a cemetery, and that is ot a standard cemetery picture. It lets you know that you are looking at a story about death, and is most morbid, but still carries a quiet beauty too. So, good choices there!

The writing is most excellent, and is done with a deft hand wrapped in a velvet glove. The characters are genuine, the emotions are real, and the ending is not telegraphed in the slightest. I am not sure if this is Owen's first stab at writing, but it certainly should not be her last. I look for bigger and bette things to come from her in the future.

Steve White helms the ship whe it comes to the narration and he is fantastic. A lot of the emotion that I talked about comes from him. His voices, both male and female, are realistic and believable, but I think it is the utter sincerity carried in his voice that brings this story to such vibrant life and is so deeply emotional. I will list him on my narrators to look for list. Even though I did receive a promo code for this review it in no way influenced my considerations of the material, and in fact, inspired me to be more honest. In fact, getting a code generally makes me harsher as a reviewer as I am more often concerned what someone like Me will decide based on my review.

A great novella with a excellent narrative descriptions, clear characters and a nice subtle twist. Nicely somewhere between sci-fi and character study. I got a surprisingly clear feeling for the life of this gravedigger from the language, and the reader was excellent in conveying the images with patience and heart. A great way to spend a short drive!

This is an interesting short story with a satisfying twist or two. Without giving anything away, it is definitely worth your time and can be pleasantly listened to in one sitting. Pleasant in no small part due to Steve White's performance of the story. His voice is easy to listen to and he truly embodied the atmosphere of the story, with the pace, colloquialisms and cadences that put the listener squarely in the location of the story as he brought each character to life with an aplomb that says "ACTOR", not just reader. I could clearly envision each person and their own humanity as the story went along. I would absolutely listen to more by this author and narrator!

George is a veteran gravedigger.
Will is just learning the ropes.
Miss Lily needs a favor.
And third time’s a charm for Rose.

A nicely done short from Kelli Owen with very good narration that really added to the atmosphere.

Short, but unique and well done

I went into this fairly blind. I'd read the synopsis briefly, but had mostly forgotten by the time I got around to actually listening. I prefer that as I prefer not to go in with my mind leading the story, and it paid off.

Flashbacks aside, the entire story takes place over the course of 2 days, and mostly in the protagonist's head. This works though, since the author obviously has a good handle on the human psyche and was able to convey a lot with very little.

I felt the two main characters of the present tense were very well-developed, and through each of them, we learned enough about their worlds and the people in it to get a great feel for both as well. This helped me empathize with each character as the story progressed.

The narration here was top notch. A great narrator conveys the tone and emotion of both the story and the characters in it without getting in the way of either. It helps that the dialogue was very well-written.

If I HAD to nitpick, I'd say that while the story is aleady short, it could've used a tiny bit of paring down. Chapter/section 3 droned a bit, but it wasn't for too long. In the penultimate chapter, things finally clicked for me, and I did spend a tiny bit of time wishing the author would just say what was obvious at that point rather than dance around it, but again, it didn't drag on enough to be annoying.

Overall, I can definitely recommend this listen. I plan to listen to the last couple chapters again as there were some subtleties there, and I think I may have missed some of them.

I enjoyed this short supernatural story about gravedigger George; you have to listen to understand the title as I do not want to give away any spoils. It has good likeable characters felt sorry for Will. This was my first from author and would recommend if you need short listen. I was given this free review copy audiobook at my request and have voluntarily left this review. Thank you

**Spoiler alert. Not sure how I feel about this one. It was fairly well written, but left me with a few questions. Why did the “witch” Violet decide to leave her body (to go elsewhere) and donate it to Rose? If Violet was facing some sort of problem (an illness or perhaps someone out to get her (the same people who attacked her family)) than wouldn’t Rose be “inheriting” that same problem? Also, for me, I wasn’t moved enough by the relationship between the lead character and his deceased wife Rose to feel good about the sacrifice of the boy. That didn’t resonate well with me at all – he was a good kid and just a kid, why should his life be forfeited so some old dude can spend another 50 years with his wife? Seems a bit greedy doesn’t it? Overall, given the difficulty I had rallying behind any of the characters and the apparent plot holes this story fell a bit flat for me. Don’t get me wrong, it was interesting and held my attention, but I just don’t feel that I got much out of the reading experience. I did learn was “Grave Wax” is and I was so grossed out by the description that I truly wish I could un-learn that information. I will say that the narrator did a nice job with this book and to be frank that’s probably what helped to hold my attention throughout the story. I would like to thank the author, the narrator, and audiobook boom for my complimentary copy of this book. I have written this fair and unbiased review of my own accord.