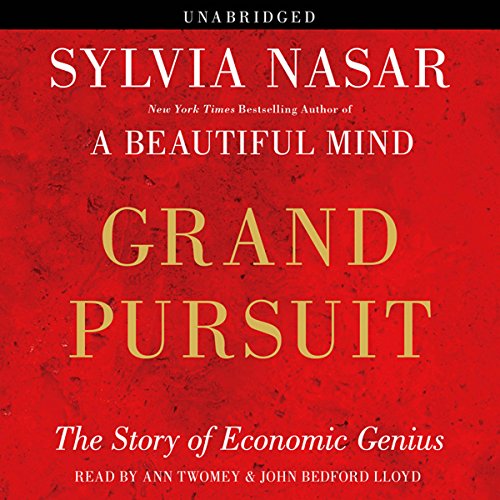 In a sweeping narrative, the author of the mega-bestseller A Beautiful Mind takes us on a journey through modern history with the men and women who changed the lives of every single person on the planet. It’s the epic story of the making of modern economics, and of how it rescued mankind from squalor and deprivation by placing its material fate in its own hands rather than in Fate.

Nasar’s account begins with Charles Dickens and Henry Mayhew observing and publishing the condition of the poor majority in mid nineteenth-century London, the richest and most glittering place in the world. This was a new pursuit. She then describes the efforts of Marx, Engels, Alfred Marshal, Beatrice and Sydney Webb, and Irving Fisher to put those insights into action - with revolutionary consequences for the world.

From the great John Maynard Keynes to Schumpeter, Hayek, Keynes’s disciple Joan Robinson, the influential American economists Paul Samuelson and Milton Freedman, and India’s Nobel Prize winner Amartya Sen, she shows how the insights of these activist thinkers transformed the world - from one city, London, to the developed nations in Europe and America, and now to the entire world.

In Nasar’s dramatic account of these discoverers we witness men and women responding to personal crises, world wars, revolutions, economic upheavals, and each other’s ideas to turn back Malthus and transform the dismal science into a triumph over mankind’s hitherto age-old destiny of misery and early death.

This idea, unimaginable less than 200 years ago, is a story of trial and error, and ultimately transcendent, rendered here in stunning narrative.

“Deeply interesting and extraordinarily moving.” (Oliver Sacks)
“[ A Beautiful Mind] might be compared to a Rembrandt portrait, filled with somber shadows and radiant light effects… superbly written and eminently fascinating…simply a beautiful book.” ( The Boston Globe)
“ A Beautiful Mind tells a moving story and offers a remarkable look into the arcane world of mathematics and the tragedy of madness.” ( The New York Times Book Review)

What listeners say about Grand Pursuit

One of the most important outcomes of a liberal education should be the permanent eradication of a romanticization of the past. On any measure we care to generate, from health to wealth, we are better off than at any point in history. Go back a mere 200 years and you will find a population hobbled by frequent and persistent famines, early death (with less than half of newborns surviving to age 5), early death, and almost endless agriculturally related toil.

How is it possible that in such a short time span, say since the early 19th century, that the world has become both immeasurable more wealthy and fantastically less equal? Why is it that some nations have seen exponential growth in income per capita, life expectancy and a drop in childhood mortality - where other societies persist in relative poverty and ill-health?

To answer any of these questions, we must first find an economist. Or at least someone who has absorbed the theories and ideas of the great economists.

The idea that a people or a nation could exert some control over its own economic destiny is a relatively new one, and has its origins in the 19th century economic thinkers that Nassar profiles in her gorgeous and essential new book Grand Pursuit: The Story of Economic Genius. From the 19th century thinkers such as Karl Marx and Alfred Marshall, grappling with the meaning for society that is shifting for agriculture to industry, Nassar moves on the great economic thinkers of 20th century and how they understood, (and tried to end) two world wars and a Great Depression.

Keynes and Hayek get top billing in this story, and through their lives Nassar illuminates the economic theories and policies that led to, and eventually helped end (with the help of World War II) the depression of the 1930s. The story of Keynes and Keynesian thought is well known to non-economists and economic historians, but Nassar's narrative on the impact of Hayek on our modern thinking was, for me, a revelation.

In Grand Pursuit, Nassar succeeds in elucidating the history of modern economic thought by evoking the personal contexts of the individuals from which these theories emerged. Grand Pursuit could have been subtitled: "A Biography of Economic Thought". This approach takes longer than a straightforward exposition of the major ideas of economic history, but by situating these ideas in the times they were conceived, the reader of Grand Pursuit ultimately enjoy a much richer and nuanced understanding of the ideas the continue to rule our world.

Grand Pursuit is the kind of book I think that will convince some people to go to graduate school to study economic history. That would be a fine result.

Would you listen to Grand Pursuit again? Why?

Yes, this book does an excellent job telling capsule life stories of the post 1850 economists (& some other social scientist), the key elements of their thought and, most importantly, the context in which they lived, and which helped to powerfully shape their thought and build the foundation of modern economics. You do not need to be an economics major or economist to appreciate this work.

The putting of economic thought into context, so that we can understand its roots when the idea of these individuals is cited (& more frequently, misappropriated) today.

What about John Bedford Lloyd, and Anne Twomey’s performance did you like?

Both narrators do a good job with the text.

Truly extraordinary but a little dull

OK, so I won't lie: it's a little dull, and I've studied economics. For those who haven't, I really do wonder if you'll find it compelling. Perhaps another reader who falls into this category could address this? But if you do have an economics background, this book is incredibly rewarding. All the figures you've kind of sort of heard of but don't know precisely what they did--Marshall, Schumpeter, Fischer, etc.--are covered quite well along with Beatrice Webb, one of the most important figures in the history of economic thought who I at least had never heard of.

A recurring theme, since the book covers lives as well as work, is various famous economists struggling to find love. We don't usually think of them this way, and I wonder whether economists were more or less romantically tormented than their contemporaries.

The other enjoyable part is learning who really weren't that significant of thinkers, despite their oversized reputations; in particular: Marx and Hayek. I've never bothered to read either, and Nasar makes clear that that's not a problem. There really are no theres there.

I found the switching back and forth of narrators irritating, and I strongly preferred the female reader to the male one. I'm not sure what led to this odd choice, but I hope this doesn't start a trend.

A Primer for Our Own Time

Sylvia Nasar, author of A Beautiful Mind, in Grand Pursuit provides us a wide ranging history of modern economic thought. Nasar takes us from the time of Charles Dickens through Marx, Engels, Marshall, the Webbs, Keynes, Schumpeter and others who reflected on the condition of the poor in society. Nasar’s sections on early London and England are most informative. The writing is delightful and readily available to the non-economist approaching it. Personalities come alive and historical context is described. This is a book well worth the time of any reader. The narration of Lloyd and Twomey is excellent.

I learned a great deal about the economists of old. I'm a computer science graduate, with a minor in international relations. I've never paid a great deal of attention to economists, and thier history.

That was before this book. Now I'm a fan of at least 3 entities. This is a whole new world for me to dig into, and learn about. Glad I read this.

The Grand Pursuit links intriguing portraits of the character and lives of famous and lesser known economists who shaped the history of economic thought and shows the context from which their ideas emerged. Nasser has an eye for telling detail and tells the story fluidly. The book seldom drags and is easily accessible. The downside is that it contains relatively little economics.

why switch narrators- Act 2??? so disruptive!

I am interested in this sort of mix of personal and cultural history...provides many insights into how the word economy developed as it did, and the personalities who contributed to our understanding of economics

Who would you have cast as narrator instead of John Bedford Lloyd and Anne Twomey ?

The female narrator was excellent...switching part-way through was just bizarre.

Was Grand Pursuit worth the listening time?

this book has far too much gossip, and too little economics

Towney is quite good; Bedford is far too slow

What would have made Grand Pursuit better?

Nothing I plan to buy it as a book and read it again by myself.

How the author brought to life all of those dead economists from long ago.

There were two narrators. The male narrator kept putting me to sleep.

Redo it with better readers!!

Book had 2 readers - one that I liked more than the other but both pretty good. With our seemingly perpetual financial crises in the recent past and on going in Europe, the United States and Asia, it was fun thinking about "What would Keynes Do?" while listening to this book.