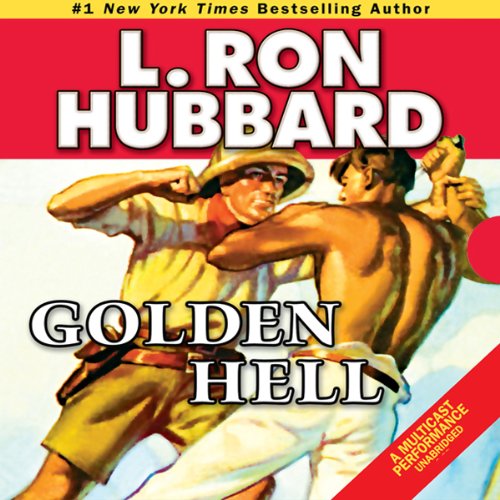 A blind obsession. A driving ambition. A relentless, unrestrained, single-minded pursuit of a shiny metal. These are the symptoms of a condition known as gold fever, and, like Bogart in The Treasure of the Sierra Madre, American mining engineer Captain Humbert Reynolds has got it bad. Possible side effects include: temporary insanity, a propensity for violence, and death.

The search for gold has taken Reynolds from the ruins of the Yucatan to the mountains of Ecuador to the wilderness of northern Canada. Now, his search for a yellow brick bonanza has brought him halfway around the world, to the Gobi desert.

But the lure of the precious metal is about to lead Reynolds into a Golden Hell, as he plunges into an inferno—a mountain of horrors run by an unspeakably evil gang. And if he doesn’t find a way out, a path to redemption, he may find that instead of snatching the ultimate prize he will have to pay the ultimate price.

Also includes the adventure, “Pearl Pirate,” a story of betrayal and deceit in which an American captain loses his ship to a money-lender, and the only way to get it back is to outfight and outfox a ruthless pirate and bring home a fortune in black pearls.

Join the race and feel the heat of gold fever as the audio version of Golden Hell leads you into a mountain of unimaginable danger and unexpected twists and turns.

“Big on action ... the music, sound quality, and production are top-notch.” —Publishers Weekly

“The cast energetically delivers the dialogue interspersed with suspenseful action and music.” —Audiofile

"Hubbard was a popular pulp writer, and it’s easy to see why: his enthusiasm for his material and his lively writing style drive the reader through the story at breakneck speed." ( Booklist)

What listeners say about Golden Hell