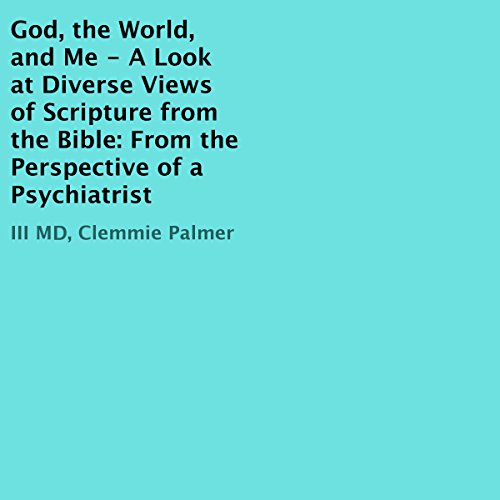 God, the World, and Me: A Look at Diverse Views of Scripture from the Bible

Have you wondered what other people from various backgrounds and cultures think about such topics as salvation? Redemption? The Lord’s Supper and its real purpose?

Clemmie Palmer III, MD has authored an easy-to-hear, entertaining book for both the layperson and the seminarian looking for a quick view on some of the major topics covered in seminary and the Bible.

Clemmie wrote: “The emphasis here is on salvation, redemption, sin, apocalyptic literature, as well as the Lord’s Supper and its purpose.” A collection of teachings culled from Clemmie’s experiences studying both various version of scripture and well-known authors on the topics, and most notably during his education at Hood Theological Seminary, this volume will challenge your thinking on some principles and likely cement your views on others.

He intends to inspire listeners to survey their paradigms in relation to others’, and in the process, find a more fulfilling place with their own thoughts and education. It is the goal of the author to motivate the listener to think outside the box and understand that a diversity of views can enrich one’s perspective on scripture, the Bible, the Gospels, the mission of Jesus Christ, his atonement, and other gospel topics. Such study and introspection of thought should be encouraged.

The author also explains his and others’ views on various changes in cultural norms from the early American claims of witchcraft in the church in the 1600s to today’s issue on homosexuality and the church. Presented in an engaging manner with major emphasis being placed on dialogue between groups, this book adds interest as well as clarity the points being made. Major topics within the group dialogues are salvation, atonement, forgiveness, sin and evil, and the Lord’s Supper. The author draws heavily on his religious experiences delving into various schools of thought regarding these topics.

What listeners say about God, the World, and Me: A Look at Diverse Views of Scripture from the Bible