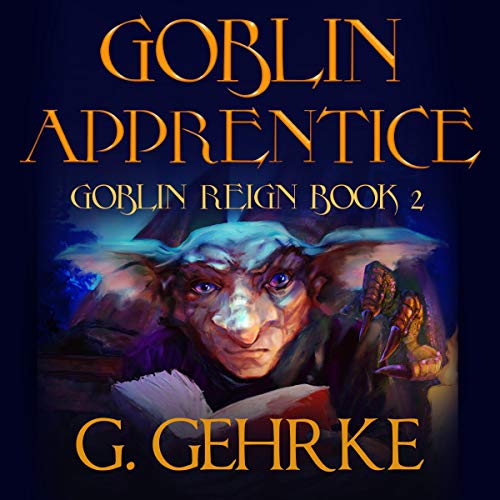 By: Gerhard Gehrke
Narrated by: Gareth Richards
Try for $0.00

Keep the dragon’s secrets, or else...

Spicy the goblin is the first creature Fath the dragon has trusted in generations. Now the dragon’s apprentice, Spicy has a chance to learn lore hidden away from human and goblin-kind alike. But Spicy has a dilemma.

Five children were kidnapped from his village, along with his best friend Rime. Saving them means bringing the dragon and Hog, the ever-hungry troll, with him on an unplanned detour. His journey will lead them into lands where few of his kind have ever gone. He will have to face humans on their own turf, all while keeping Fath and Hog from killing each other.

Standing in Spicy’s way is a group of ruthless mercenaries led by the warrior woman Alma. For these killers, murdering one more goblin will be just another day’s work, especially if that goblin is standing in the way of their biggest payday ever. And dragon secrets are worth a troll’s weight in gold!

Goblin Apprentice is the second installment of the Goblin Reign series, a dark fantasy adventure full of action and twists.

What listeners say about Goblin Apprentice

A fun new adventure with Spicy and now we have a dragon and troll along too. This series is geared more toward the middle grade to high school boy but any fantasy lover looking for something out of the normal read will thoroughly enjoy this one.

Parents- PG13 - These books are have quite a bit of violence with some mild gore (could bother the squeamish), some mild language and no sexual content in this book (bk 1 goes into mating habits of trolls but not graphically and has more gore then the other books).

I've been anticipating the release of this book, and it did not disappoint in the least. Iespecially loved the change in focus between Spicy and Alma, and the changes that constantly happen with the plans of the characters is a nice addition to a changing plot line. The ending will bring about a suprise.

The narration continues to improve and I feel that Gareths doing great with these characters!

I have really enjoyed the first two books in this series. It is a fantasy series, but does not follow the traditional framework of such stories. Humans are generally portrayed as bad, and the hero so far is a goblin who has been able to forge alliances with other unusual characters, including a troll and a dragon.

There are so many things about this story that I didn't expect to like...the main character's name is Spicy, which is not something I would choose for a hero. And the story is very dark, with all types of horrible evil around the story. But somehow, it all comes together beautifully.

The narration is masterful, with many distinct voices for each character.

I look forward to the next two in the series

I was given a free copy of this audiobook at my request in exchange for an unbiased review.

Book two of the series finds our trio of dragon, goblin apprentice, and sea troll still
Fighting those pesky humans, each other and whatever fate has in store for them. New and old enemies will be found. Never go be anything for free that can be sold. But be very careful when following this adage. Our dragon will find that something in his image of the world has gone horribly wrong and there has been a betrayal of the highest order. Our goblin will find himself better/worse off then he has ever been. And our troll is still a stalwart friend and ally to our goblin. Great story well written and well narrated. I was voluntarily provided this free review copy audiobook by the author, narrator or publisher

The author has done it again! Another great story! The off the spice goes through, he leaves you guessing! Narrator makes the story come alive!

What a wonderful series!

As with book 1, this book did not disappoint. I totally adore Spicy! I have never thought as goblins as anything but creature/monsters before and as a gamer to change my thinking is a valuable thing. The next time I have a goblin in one of my adventures they will be forever changed from the ones we are normally presented with. Even Dragons agree humans are not the greatest of species but are capable of both geocide and sacrifice but until they grow more are not able to handle any advanced knowledge, even now. Great series of books though, very fun to read, British sounding goblins are just wonderful so please do not switch narrators on this series!