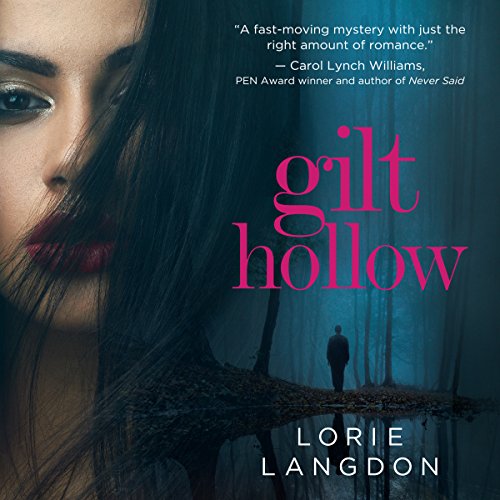 By: Lorie Langdon
Narrated by: Emily Lawrence
Try for $0.00

Willow Lamott’s best friend is a convicted killer, and no one in the small town of Gilt Hollow will let her forget it. Over four long years, she’s tried to fade into the background - but none of that matters when Ashton Keller comes striding into school, fresh out of juvie and fueled by revenge. The moment their eyes meet, Willow no longer feels invisible. Drawn to the vulnerability behind Ashton’s mask of rage, she sinks deeper into his sinister world and begins to question whether he’s a villain, a savior, or both.

Ashton thought he wanted vengeance until Willow Lamott stepped back into his life. Now he longs to clear his name and become the person she sees in him. But the closer they get to uncovering the truth, the darker the secrets become, and Ashton wonders if his return to Gilt Hollow will destroy everyone he loves.

What listeners say about Gilt Hollow

Couldn't finish the book and that was after forcing myself through 20 chapters. Not only was the writing cheesy and unrealistic, but the plot was ridiculously predictable and unbelievable. A forced love triangle, copied plot points (see the Notebook), and pathetic attempt at a murder mystery. I love this genre, but this book fell extremely short for my standards.

I was very much in the mood to read a book like this, but they are not easy to find. It has just the right amount of mystery, suspense, and romance. I was drawn into the compelling story by walking in the footsteps of these interesting characters. Willow has been dealing with the aftermath of being the only person to believe her best friend was innocent of murder when he was sent away to jail. Ashton has been struggling to survive in prison after being abandoned by even his own parents. He's a fascinating character who is angry and tough, but also caring and intelligent. So many brooding male characters are written only as rude and obnoxious jerks who clash with the heroine until they eventually soften toward her after realizing that she is 'special.' Ashton is written with much more depth. He retains a bad boy edge while being deserving of Willow's affections right from the beginning. His circumstances have hardened him, but he doesn't treat people like dirt. He also has a very entertaining attitude. I loved the way he presented himself when he sauntered back into school. That was badass.

I was very excited for Willow and Ashton to see each other again, and it lived up to my anticipation. I loved all their interactions. They have such an intense connection that goes deeper than physical attraction. So few authors are able to write clean romance that is not boring or immature. This author clearly has the ability to write intense attraction without resorting to anything explicit. In fact, the kissing scenes are hotter than many of the sex scenes I've read in other books. Willow and Ashton have sizzling chemistry even when they are just looking at each other.

The author also kept me guessing about who the villain was. More than one person had a motive, and I suspected each person equally. It was a believable and suspenseful mystery, and I was engaged in trying to solve it as much as the characters were. The only thing I felt was missing was the reaction of Daniel's mother when the real killer was revealed. She took out so much of her anger on Willow that it would have been satisfying to have a scene in which she acknowledged that Willow was right about defending Ashton.

This book is going into my favorites, because I absolutely loved everything about it. I have now listened to the audiobook as well, and the narration is well-done. While I was reading the kindle version, I was completely caught up in what was happening and how it would all turn out. Getting to savor the story as an audiobook, I was struck by how skillfully written it is. This is an author who shows rather than tells. Emotions are conveyed through body language and tone of voice. Being able to feel the tension makes the story much more exciting than just being told that someone is angry. I know that I'll enjoy listening to this book again.