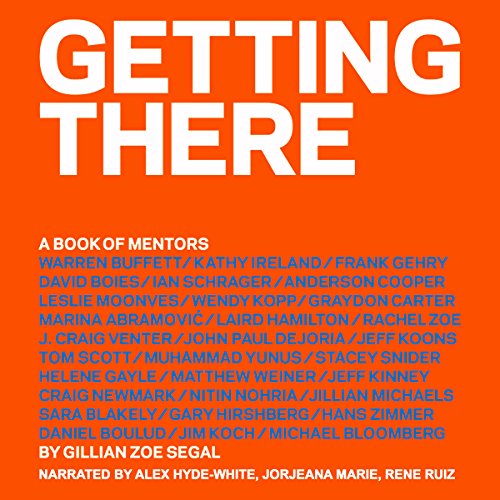 Getting There: A Book of Mentors

The path to success is rarely easy or direct, and good mentors are hard to find. In Getting There, 30 leaders in diverse fields share their secrets to navigating the rocky road to the top. In an honest, direct, and engaging way, these role models describe the obstacles they faced, the setbacks they endured, and the vital lessons they learned. They dispense not only essential and practical career advice, but also priceless wisdom applicable to life in general. Getting There is for everyone - from students contemplating their futures to the vast majority of us facing challenges or seeking to reach our potential.

What listeners say about Getting There: A Book of Mentors

These rich people are way cooler than I expected.

What made the experience of listening to Getting There: A Book of Mentors the most enjoyable?

I liked that there were a few different voice actors in this one. One of the male actors in particular was really great, but I don't know which one.

It feels kind of cheesy to say, but this book was actually super motivational. I listened to it on my way to work and by the time I got there, I felt ready to give it my all. I'm impressed that the author was able to get interviews with all of these people

The creator of Mad Men guy said some great stuff...I had to look up this line again, but it really stuck with me: "A great idea is worthless; execution is everything. It doesn't matter if you invented Star Wars before Star Wars existed."

I always knew Anderson Cooper was smart and handsome, but I had no idea how much of a BADASS he is. Wow, he's been through a lot and taken a lot of risks to get where he is, which I really respect. CRUSH SOLIDIFIED. And Warren Buffet used to literally throw up if he had to do any public speaking?! lol Love it! Made me feel like I'm not completely lost and still have time to "Get There" too.

Frank Gehry's chapter stands out for me. One of his pearls of advice was startling for me as a designer because it was so on target and yet something I had never heard a creative person observe or provide advice about before. You'll have to listen to learn more.... It was also very helpful to me as a dyslexic to find a set of the mentors in this book who share an arc of experiences - not fitting in as kids, taking jobs seeming below their calling or wide of the mark, and then later pulling everything together in a grand slam. Saying that it's good to see this story played out again and again by people, some who are very likely also dyslexic, is an understatement. Thank you Gillian. The book is an act of mentorship.

What made the experience of listening to Getting There: A Book of Mentors the most enjoyable?

I liked the male narrator. Also, learning some of the back stories of famous people was cool.

What other book might you compare Getting There: A Book of Mentors to and why?

I don't read a lot of personal development books...seems like it's probably similar to some of those.

There were no characters, just real people.

It had short chapters, so it was good to listen to in quick shifts.

I got this for free in exchange for an honest review.

I loved the story and will look for more books by the author but the one female narrator sounded like she had a blocked nose which caused an uneasy feeling and discomfort even though she was good. I did however enjoy the overall narration. Most narrators were brilliant

Must read for young entrepreneurs

loved the content behind the book and the narrators were amazing! This book was a good read.

love hearing from the greats...

favorite part was hearing each person's pearls of wisdom. very inspiring especially if you are trying to be great...

Started good with Buffet, downhill from there!

This book was just okay with basically stories of millionaires rise to fortune and fame. There are some interesting stories, but after a while, all sound similar.

Good book but one narrator sounded a bit nasally

Good book and variety, shared some useful reminders but I was expecting more substance and a step by step guide. Loved the variety of fields, helped me realize the various ways of defining success.

A book of insight

I suggest listening to this book with an ongoing document to take notes. Several thoughts will come to mind and don't let then slip away. It is a very good book!

Excellent for those starting out who are a little lost and for those who want to get started wherever they are in life... plenty of gems to get you better equipped with wonderful advice and get you excited about your personal capabilities... thoroughly recommended.. Wish I had read it when I was 19!

Great to hear from great people about their lives

It is great to hear from successful people and see that they are in the same, sometimes even worse, situation than ours and how they changed their lives.
Will listen to it again in the future.