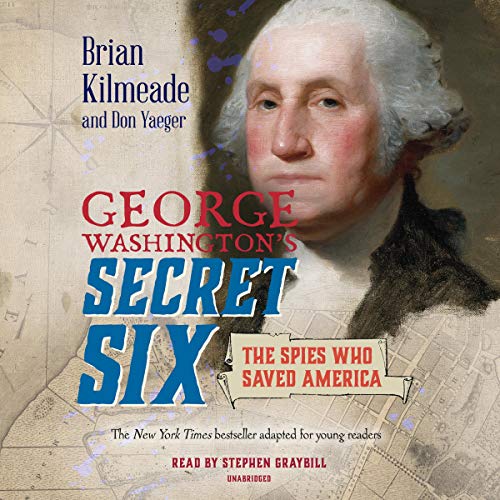 By: Brian Kilmeade,Don Yaeger
Narrated by: Stephen Graybill
Try for $0.00

The American Revolution is well under way in 1776, but things are looking bleak for General George Washington and his Continental Army. With Washington's hasty retreat from New York City in August, many think the war might soon be over. After all: how on earth is this ragtag group going to defeat its enemy, the well-trained and well-funded military of the largest empire in history?

But Washington soon realizes he can't win with military might. Instead, he must outsmart the British, so he creates a sophisticated intelligence network: the top-secret Culper Spy Ring. Drawing on extensive research, Brian Kilmeade and Don Yaeger tell the fascinating stories of these long unrecognized spies: a reserved merchant, a tavern keeper, a brash young longshoreman, a curmudgeonly Long Island bachelor, a coffeehouse owner, and a mysterious woman.

This vivid and accessible young readers adaptation of the New York Times best seller features an exclusive new introduction and extensive back matter. Chronicling a crucial moment in American history, this historical thriller will excite and inspire the next generation of patriots.

Got into watching the show TURN on Netflix. Found this gem on Audible. Really enjoyed the historic background on Washington's spies. highly recommend it!

This is a good book if you are lame

This book had me lost in the several time. Story was ok if you are bored.