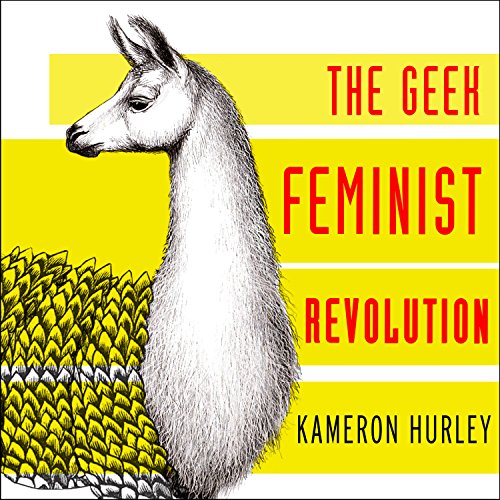 As geek culture goes mainstream - from Game of Thrones to the Avengers - it's never been more important to look at the role women play in it and the future they're helping to create. And Kameron is the smart, funny, and profane voice we need to guide listeners through the world of fandom and the coming revolution in pop culture.

Has Geek Feminist Revolution turned you off from other books in this genre?

No, I've read great books on this topic, this one just isn't very strong.

Would you be willing to try another one of C. S. E. Cooney’s performances?

Absolutely not, I actually think the narration turned me off to the book even more than the book itself.

What character would you cut from Geek Feminist Revolution?

This book was rough to get through. First off I feel like the marketing is inaccurate, it’s not really so much a “collection of essays on feminism, geek culture, and a writer’s journey” as it is primarily about the author and her struggles to become an author and advice on how to become an author. This is all fine and well, but if I’d known that I probably wouldn’t have bothered with it.


There is one chapter that is particularly good especially with the current attempts to repeal the ACA, where she talks about living with a chronic illness before the ACA. It’s moving and really draws into sharp relief how much this repeal/replace BS is going to hurt people.


But overall, I was frustrated by this book. I didn’t feel like it added anything to my knowledge of geek culture or feminism, it didn’t offer me any new perspectives or challenge my existing views. I think ultimately the writing wasn’t very strong because even though I’ve read similar memoir style essay collections from other writers that I found extremely relatable, I found it really difficult to relate to most of these. I don’t need to relate to an author to enjoy their work, but I need to find something about their work relatable, or thought provoking or something and I just didn’t get that here. There would be moments that engaged me, but on thinking about them later I realized it was just because they were pretty general arguments that I was already aware of and already agreed with.

Overall it’s not an awful book, but there are better books on both feminism and geek culture.

all authors should give a listen

I have to admit I spent some time discussing my reactions to this book with my mother.

My upbringing was quite different from the author's, so I did spend some of the essays thinking "you really grew up thinking that?" but that didn't diminish the emotional power of hearing her discoveries.

the work points out many issues we should be thinking of when we present our work to the world at large.

I read the title and overview and thought, "This will be an interesting take on how women are portrayed in modern pop culture and how we as a society can adjust our stereotypical portrayal of women to better reflect their true value." Instead my girlfriend (a strong feminist herself) and I listened to the first fifteen minutes of this author telling her personal sob story of how she wasn't treated fairly as a writer because she was a woman. Not that I'm not sympathetic to this woman, but I didn't select this book to hear her complain about how hard it is to be a woman in her field.

Well that was misleading...

It's not so much as the writing is bad. The title, subtitle and short audiobook description didn't seem to represent what the book really is about: the author's experience and growth as a writer. In a way, it's a feminist book because the author shares her experience in the geek realm of writing and how it's often difficult for women to thrive. I just don't think it should be labeled AS a feminist book. It's more of a book for writers. Get my drift?

I'm not done with the audiobook as I write this review but I can't see myself enjoying this. The narration is also something I can't seem to enjoy. There's something about the narrator's tone and pronunciation that's not engaging for me. She sounds almost angry. And the overly pronounced words is a bit distracting. I wonder if I'd enjoy this more as a physical book.

Others might find this more interesting, especially writers. It's not for me.