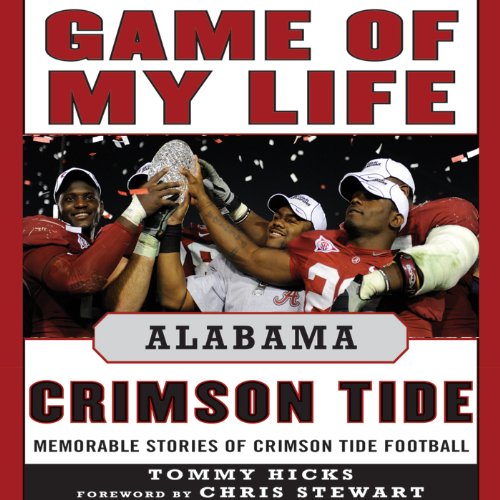 Game of My Life: Alabama

To borrow the slogan offered over the Bryant-Denny Stadium public address system before the start of every Alabama home game, "This is Alabama football."

Ask a fan to talk about his favorite game and he’ll probably answer, "Which season?" Ask another to describe his favorite Crimson Tide play, and he may also respond the same way. And if asking an Alabama fan to recall his favorite player, don’t be surprised if you are asked to be more specific: "Which year? Which game? Which position?" Such is the tradition and legacy of the program.

The tradition connects former coaches and players to the current team, and fans from the program’s early days to those of today. Written by Tommy Hicks, who has worked for five newspapers in the state of Alabama over a 30-year span, Game of My Life: Alabama offers a view from field level and in the huddle as 30 Alabama players share the experiences and emotions of the favorite games of their careers.

From Harry Gilmer and his excellent play in the 1946 Rose Bowl to Brodie Croyle leading Alabama to an impressive win over Florida in the 2005 season, Alabama has had more than its share of great moments, great games, and great players. Game of My Life: Alabama focuses on 30 of those moments, 30 of those games, 30 of those players. You’ll discover the simple advice and prediction head coach Paul "Bear" Bryant gave his team before the 1967 Auburn game won by quarterback Ken Stabler’s famous "run in the mud". You’ll also be given an insider’s view of a favorite game for Ken Stabler, Mike Shula, Brodie Croyle, Lee Roy Jordan, Cornelius Bennett, Billy Neighbors, Woodrow Lowe, Joey Jones, Bobby Humphrey, and many others.

Game of My Life: Alabama highlights some of the games and moments that have added to the tradition of Alabama football.

What listeners say about Game of My Life: Alabama

I enjoyed the book greatly. I really liked hearing the first hand accounts of past Alabama players.