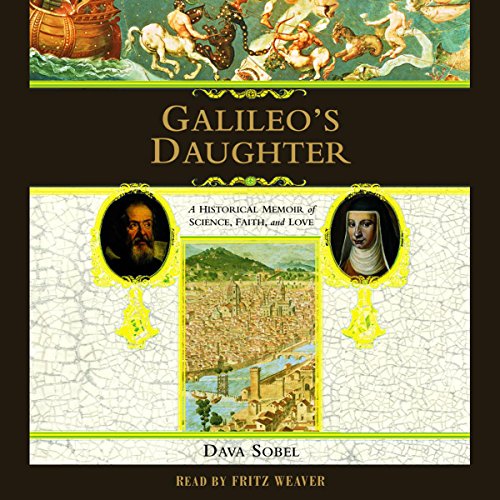 By: Dava Sobel
Narrated by: Fritz Weaver
Try for $0.00

Galileo Galilei was the foremost scientist of his day. Though he never left Italy, his inventions and discoveries were heralded around the world. His telescopes allowed him to reveal the heavens and enforce the astounding argument that the Earth moves around the sun. For this belief, he was brought before the Holy Office of the Inquisition, accused of heresy, and forced to spend his last years under house arrest.

Galileo's oldest child was 13 when he placed her in a convent near him in Florence, where she took the most appropriate name of Suor Maria Celeste. Her support was her father's greatest source of strength. Her presence, through letters which Sobel has translated from Italian and masterfully woven into the narrative, graces her father's life now as it did then.

Galileo's Daughter dramatically recolors the personality and accomplishment of a mythic figure whose 17th-century clash with Catholic doctrine continues to define the schism between science and religion. Moving between Galileo's public life and Maria Celeste's sequestered world, Sobel illuminates the Florence of the Medicis and the papal court in Rome during an era when humanity's perception of its place in the cosmos was overturned. With all the human drama and scientific adventure that distinguished Latitude, Galileo's Daughter is an unforgettable story.

What listeners say about Galileo's Daughter

It was more about Galileo than his daughter, but it did end up on her. I'm definitely glad I listened.

read first time 30 years ago. bought at barnes and nobel silver spring md this my forth read

Fascinating insight to the time period and life is Galileo. Definitely glad I chose the audio version.