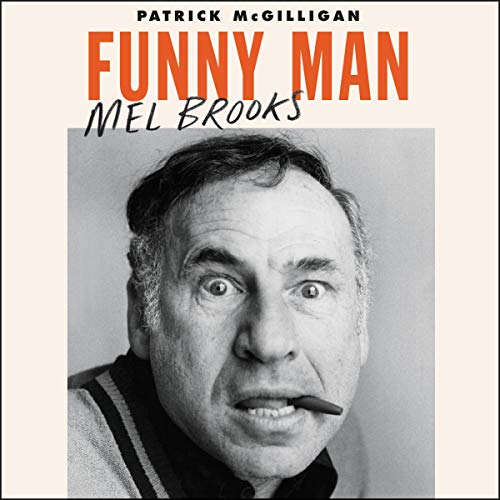 By: Patrick McGilligan
Narrated by: Stephen Hoye
Try for $0.00

A deeply textured and compelling biography of comedy giant Mel Brooks, covering his rags-to-riches life and triumphant career in television, films, and theater, from Patrick McGilligan, the acclaimed author of Young Orson: The Years of Luck and Genius on the Path to Citizen Kane and Alfred Hitchcock: A Life in Darkness and Light.

Oscar, Emmy, Tony, and Grammy award-winner Mel Brooks was behind (and sometimes in front of the camera, too) some of the most influential comedy hits of our time, including The 2,000 Year Old Man, Get Smart, The Producers, Blazing Saddles, and Young Frankenstein. But before this actor, writer, director, comedian, and composer entertained the world, his first audience was his family.

The fourth and last child of Max and Kitty Kaminsky, Mel Brooks was born on his family’s kitchen table in Brooklyn, New York, in 1926, and was not quite three years old when his father died of tuberculosis. Growing up in a household too poor to own a radio, Mel was short and homely, a mischievous child whose birth role was to make the family laugh.

Beyond boyhood, after transforming himself into Mel Brooks, the laughs that came easily inside the Kaminsky family proved more elusive. His lifelong crusade to transform himself into a brand name of popular humor is at the center of master biographer Patrick McGilligan’s Funny Man. In this exhaustively researched and wonderfully novelistic look at Brooks’ personal and professional life, McGilligan lays bare the strengths and drawbacks that shaped Brooks’ psychology, his willpower, his persona, and his comedy.

McGilligan insightfully navigates the epic ride that has been the famous funnyman’s life story, from Brooks’s childhood in Williamsburg tenements and breakthrough in early television - working alongside Sid Caesar and Carl Reiner - to Hollywood and Broadway peaks (and valleys). His audiobook offers a meditation on the Jewish immigrant culture that influenced Brooks, snapshots of the golden age of comedy, behind-the-scenes revelations about the celebrated shows and films, and a telling look at the four-decade romantic partnership with actress Anne Bancroft that superseded Brooks’ troubled first marriage.

Engrossing, nuanced, and ultimately poignant, Funny Man delivers a great man’s unforgettable life story and an anatomy of the American dream of success.

What listeners say about Funny Man

While in theory bound by the facts of an individual's life, a biographer enjoys discretion in how or even whether these facts are presented. The choices of which facts to emphasize and the context in which to present them can skew perception of the subject or even strongarm the audience into conforming with the author's perception, In this way an author can tacitly turn a biography into an op-ed.

In "Funny Man," a title I guess used ironically in reference to the man himself, the listener is force fed like foie gras the many flaws of Mel Brooks. Infidelity! Deceit! Litigation! Oh My! We stew in it ad nauseam, and it bastes our vision. Brooks' professional triumphs and cultural legacy are soured and minimized by the constant focus on his awfulness.

It's Mel minus joy, and objective it ain't. It's hard to escape the feeling that the author just doesn't really care for Mel Brooks. As a big fan of his work, I can stomach the truth of his disputes and foibles, but not at the expense of diving into what his work means to people and how much happiness he has brought into the world. I wasn't hoping for a hagiography, but I also wasn't hoping for the National Enquirer.

Funny Man is a brutal biography of Mel Brooks. While the author, Patrick McGilligan demonstrates Brooks’s genius as a gifted writer, comedian, song writer and producer, McGilligan also unveils how Mel Brooks used people, abused and cheated on his first wife and refused to support her and their three children. I found the narrative a little too brutal but I also felt that the author felt He needed to unmask who the “ real Mel Brooks is”! I think the book is worth reading.

He reads every sentence as it if were a standalone item -- no context or consideration for what came before it or after it. Very, very odd.

Great story but no love letter.

No hold bared."I didn't get a harumph out of that guy" "WATCH YOUR ASS!" .. love you no matter what Mel!

I appreciate the honesty of this biography. Mel Brooks is an extremely funny man, but he does have a large ego and he treats business as business. The early part of his career felt very in-depth. The second act of his life and career felt rushed and it felt like a rinse and repeat for each movie or project he was involved with. The author is very honest and I like that, but I don't like how he throws in his own opinions. He tends to make sure to touch upon the bad parts of Mel Brooks after a triumph to remind us that Mel is a flawed person, but he seems to do that at odd times, almost like he never wants to give the subject a win.

Loved it. It was a great and illuminating tale of one of my favorite artists.

Big disappointment about the actual story! Well spoken though! Never knew Mel was so insecure.

This book needs to be abridged

Gave up on it - In my opinion ( an average, enthusiastic fan of the great comedian / author) there’s just way too much background on Mel Brooks for the average listener.

Warts and all story of a comic legend.

No holds barred coverage of a legendary writer and performer. Well researched and detailed telling of a fascinating life story. Plenty of behind the scenes stories to whet any fan's interest.