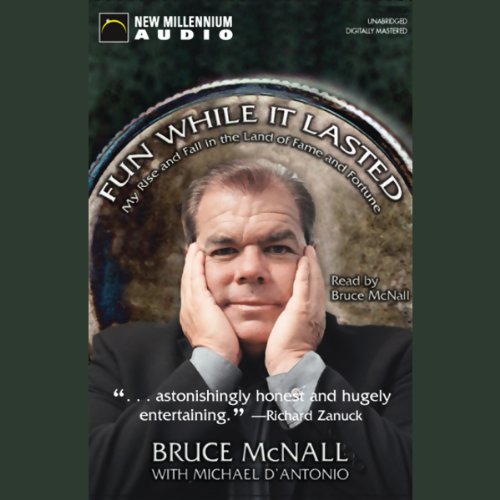 Fun While It Lasted

Fun While It Lasted is the whirlwind story of Bruce McNall's life as a player. McNall started in the ancient coin business. Soon, he branched out into horse racing, movies ( The Fabulous Baker Boys), and major league sports as owner of the L.A. Kings hockey team. McNall was the toast of Los Angeles, attending glamorous parties, and living the life of a celebrity. Eventually, however, he had to borrow huge amounts of money, and ultimately his empire collapsed amid charges of fraud and deception. He was sent to prison for admittedly bilking banks out of more than $200 million.

Here is the tale of how McNall convinced Wayne Gretzky to play for his Kings; how he helped Merrill Lynch start a coin fund that eventually lost millions of dollars; how he played fast and loose in Hollywood. McNall's memoir is a compelling look at life at the top, and how hard and fast one can fall.

What listeners say about Fun While It Lasted

I have always been intriged by Mr. McNall and actually met him back in the early nineties. ENOUGH brushes with fame. Anyway, it is an eenteraianing story of the building of a house of cards and it's quick collaspe. Bruce is a smart guy, and has a great mind, now he needs to make it all over again....the right way!

What a great story!
Though it starts slow, you cant help but get caught up in the rise and fall of such an icon.
The one gripe I have about this one is that the author should have left the reading to the pro's. Often difficult to understand through the mumbling, that was the only downfall of this title.

Fun While it Lasted

Being a Canadian and a hockey fan now living in Arizona I felt compelled to try and find out the real story behind losing our National Treasure. Not only did I believe the McNall side, I found myself thoroughly enjoying the ride of an entrepreneur. Good luck Bruce, I hope you have learned from your mistakes.