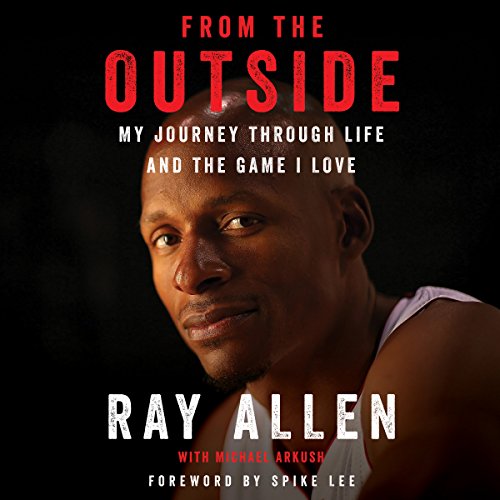 By: Ray Allen,Michael Arkush
Narrated by: J.D. Jackson
Try for $0.00

The record-holding two-time National Basketball Association champion reflects on his work ethic, his on-the-court friendships and rivalries, the great teams he's played for, and what it takes to have a long and successful career in this thoughtful, in-depth memoir.

Playing in the NBA for 18 years, Ray Allen won championships with the Boston Celtics and the Miami Heat and entered the record books as the original king of the three-point shot. Known as one of the hardest-working and highest-achieving players in NBA history, this most dedicated competitor was legendary for his sharp shooting. From the Outside, complete with a foreword by Spike Lee, is his story in his words: a no-holds-barred look at his life and career, filled with behind-the-scenes stories and surprising revelations about the game he has always cherished.

Allen talks openly about his fellow players, coaches, owners, and friends, including LeBron James, Kobe Bryant, and Kevin Garnett. He reveals how, as a kid growing up in a military family, he learned about responsibility and respect - the key to making those perfect free throws and critical three-point shots.

From the Outside is the portrait of a gifted athlete and a serious man with a strongly defined philosophy about the game and the right way it should be played - a philosophy that, at times, set him apart from colleagues and coaches, while inspiring so many others, and lead to the most pivotal shot of his career: the unforgettable three-pointer in the final seconds of Game 6 of the 2013 NBA finals against the San Antonio Spurs. Throughout, Allen makes clear that success in basketball is as much about what happens off the court as on, that devotion and commitment are the true essence of the game - and of life itself.

What listeners say about From the Outside

It wasn't bad, but I thought it would be better

I knew most of the stories he discussed, but I thought it would be much more detailed. He rushed through basketball seasons in about two sentences. There was no real thrill to hear about the games, drama, and victories from his perspective. I enjoyed watching the games and hearing the media discuss it more. The one and only thing I did enjoy was learning more about him personally. He seems like a very well mannered kool fellow.

The book was okay, but Shaq's book was 90 times better.

Wish Ray was the narrator, but narration was good.

Nice biography from one of the best shooters ever. Life lessons sprinkled throughout Ray shares insights and personal anguish pain, insecurities and dreams.

Ray Let's Us In

From the "Outside" Ray Allen always seemed stoic and reserved, so I found the book refreshing because he let's us in on how he truly feels. Ray opens up about KG, Paul, Raja Rondo, Doc, the Celtics, and LeBron James. I loved how this story was told. It was honest and didn't seem like he threw anyone under a bus. He even takes ownership of some of his mistakes in life and with his teammates in basketball. Ray seems like a really mature man. He puts his family first and basketball second. Ray was a professional who did his job well. However, sometimes when you are mature and others aren't, you may come across as if you are better than they are, but I am glad Ray never became anyone he was not in order to please others or to fit in. No doubt his upbringing had a lot to do with his manners and the respect he shows for others. As a Celtics fan, I never knew the goings on behind the scenes, so it felt nice being let into Ray's world even though I'm just a fan on the "outside." 😉

Ray Allen is a class act!

one of the few pure professionals in the NBA. glad i learned about his experience.

I respect Ray for his honest view, on and off the court. It was something about the readers voice and diction in certain places that U did not care for.....just my opinion.

I love being able to hear the inside stories of the Celtics years. I recommend this book to any basketball fan of the game. To better understand one of the great players and all time best shooters His commitment to his routine was interesting and explains why he was such a great shooter.

The book drags, more punch needed from the narrator

While I understand that Ray Allen is not the most dynamic speaker and has a much more subdued style that the narrator matches, this just doesn’t work very well for a long audiobook. There is not much enthusiasm in any section including when he talks about excitement over winning championships or other aspects of his life. I would say it was a sleepy, uninspired read. Perhaps that was the direction to JD Jackson.

As a long time fan of Ray in his UConn days and following him professionally, I admired his professionalism and his work ethic. He reveals a much bigger ego than I remembered.

The best part of the audiobook is learning about the relationship with the big 3 in Boston and the trouble with Rondo.

Quality book for big NBA/Ray Allen fans. Definitely worth checking out whenever you got some time to burn.

alot goes on behind the cameras on teams and life