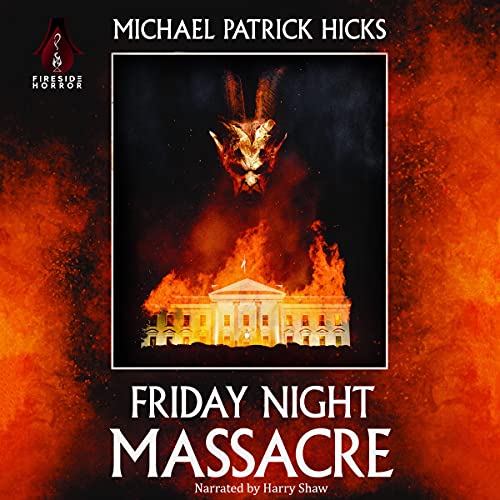 By: Michael Patrick Hicks
Narrated by: Harry Shaw
Try for $0.00

Night of the Demons meets Olympus Has Fallen in this novel of White House horror from “one of the supreme rulers of delivering unsettling, gore-filled bursts of violence” (Steve Stred, author of Ritual).

After succumbing to a deadly virus and incurring the wrath of voters in the 2020 election, the president of the United States makes a deathbed deal with the devil.

Imbued with supernatural power, President Tyler Coleridge refuses to surrender office after being defeated by his rival candidate and rings in the New Year with a White House bloodbath.

After turning against the press and his own Secret Service detail in a violent display of savagery, it’s up to the lone survivor of Coleridge’s protective detail, Mike Hutchinson, to put a stop to the US president’s reign of madness before the nation is utterly crippled.

Inspired by recent events, Friday Night Massacre is a splatterpunk horror action novel in the grindhouse fashion, with a dash of comic book sensibility.

Friday Night Massacre contains graphic content that may be upsetting to some and is recommended for fans of extreme horror.