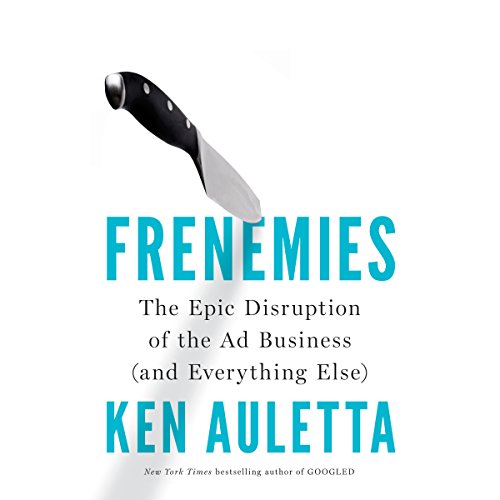 By: Ken Auletta
Narrated by: Jonathan Todd Ross
Try for $0.00

An intimate and profound reckoning with the changes buffeting the $2 trillion global advertising and marketing business from the perspective of its most powerful players, by the best-selling author of Googled.

Advertising and marketing touches on every corner of our lives, and is the invisible fuel powering almost all media. Complain about it though we might, without it the world would be a darker place. And of all the industries wracked by change in the digital age, few have been turned on its head as dramatically as this one has. We are a long way from the days of Don Draper; as Mad Men is turned into Math Men (and women - though too few), as an instinctual art is transformed into a science, the old lions and their kingdoms are feeling real fear, however bravely they might roar.

Frenemies is Ken Auletta's reckoning with an industry under existential assault. He enters the rooms of the ad world's most important players, some of them business partners, some adversaries, many "frenemies," a term whose ubiquitous use in this industry reveals the level of anxiety, as former allies become competitors, and accusations of kickbacks and corruption swirl. We meet the old guard, including Sir Martin Sorrell, the legendary head of WPP, the world's largest ad agency holding company; while others play nice with Facebook and Google, he rants, some say Lear-like, out on the heath. There is Irwin Gotlieb, maestro of the media agency GroupM, the most powerful media agency, but like all media agencies it is staring into the headlights as ad buying is more and more done by machine in the age of Oracle and IBM. We see the world from the vantage of its new powers, like Carolyn Everson, Facebook's head of Sales, and other brash and scrappy creatives who are driving change, as millennials and others who disdain ads as an interruption employ technology to zap them. We also peer into the future, looking at what is replacing traditional advertising. And throughout we follow the industry's peerless matchmaker, Michael Kassan, whose company, MediaLink, connects all these players together, serving as the industry's foremost power broker, a position which feasts on times of fear and change.

Frenemies is an essential audiobook, not simply because of what it says about this world, but because of the potential consequences: the survival of media as we know it depends on the money generated by advertising and marketing - revenue that is in peril in the face of technological changes and the fraying trust between the industry's key players.

“A brightly readable, cinematic tour through the seismic changes currently altering the face and the very nature of the marketing and advertising professions...the most vivid account to date of what may be the most crucial moment in advertising history - the moment when data went from servant to master.” (Christian Science Monitor)

“[A] timely dive into an industry in tumult.... Auletta, a veteran New York writer who has covered both Wall Street and the media for decades, does a remarkable job of digging into the personalities and the covert deals.” (Financial Times)

“Auletta masterfully maps the rapidly evolving topography of the advertising industry.... Perhaps most prescient is Auletta’s spot-on analysis of the interplay between traditional and social media.... Other fascinating topics include how efforts such as Citibank’s Citi Bike bike-sharing program in New York City and YouTube Red represent new forms of advertising; how Facebook fell prey to Russian attempts to influence the 2016 US presidential election; and how smartphones have revolutionized advertising. Intelligent and well researched, Auletta’s lively survey serves as an excellent primer to a brave new world.” (Publishers Weekly)

What listeners say about Frenemies

How the ad business is changing

I’ve always enjoyed Ken Auletta’s books. He is one smart author and always provides deep insights into complex topics. This book dives deep into the world of media, entertainment and advertising.

Seismic changes are happening as consumers seek to escape the legacy practice of interruption and annoyance marketing. Subscription services such as Hulu, Netflix and Amazon Prime are booming. More people than ever are willing to pay money each month just to escape the din of advertising’s assault on the senses.

This book is packed with amazing insights. Auletta reveals the many trends that are morphing the advertising landscape and the many new players eagerly seeking to carve out a share of the profits.

I learned a lot, but this book took some real work to get through. Auletta’s other books did a great job of methodically guiding customers through a story. He masterfully made complicated topics understandable.

Unfortunately, this book was rather disjointed. It is more a random collection of thoughts and observations on trends. It’s a shame because Auletta’s insights are quite prescient. The first half of the book is particularly cluttered, but it gets better in the second half.

Despite its lack of narrative, this was a refreshingly smart book. I’m quite glad I read it. It definitely gave me new insights and has me looking at the world of media and advertising with a new perspective.

Full of important info about the shaking up of the advertising industry, but needs to be culled to 2/3 length. Repeats itself often and dwells too long on bios of figures.

Fascinating perspective on the forces reshaping an industry once controlled by a few megaholding companies - and in turn, reshaping consumerism as we know it.

Good; not for beginners

I wanted to learn more about the advertising business. I got some things from this book but it was very detailed with lots of name dropping and I’m not sure I could tell you the difference between an ad agency and a media agency after having read the entire thing.

The most interesting part of this book is how Auletta took an interesting topic in a storied, fast-changing industry and made it painfully dull. It’s like Ross is reading the organizational chart from the appendix of a business school case study, written by a b-grade airport novelist.
UPDATE: Read several more chapters. Still terrible.

Are you in traditional media? Start planning your exit strategy

GreAt fantastic book for the gym. I’m in advertising director or print publication of course branching out into the world of digital knowing that in a very short time all they can go away however I’ve known her for the past 10 years and been getting ready happy exit strategy everyone.