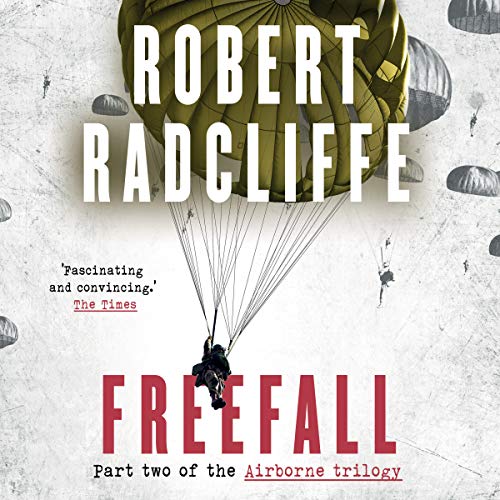 By: Robert Radcliffe
Narrated by: Peter Noble
Try for $0.00

Dreadfully injured in the Arnhem landings, paratrooper Theo Trickey was never expected to survive. Medical Officer Captain Daniel Garland pulled Trickey's comatose body from a pile of corpses, keeping him alive as they were shipped to a prisoner-of-war camp in Germany.

As Garland discovers, Trickey has had a remarkable war. Boy soldier, commando, paratrooper, intelligence officer - fighting from northern France to the African desert.

But that's not all. What was Trickey's connection with Germany's greatest general, the recently deceased Erwin Rommel? Why have the Desert Fox's loyalest officers tracked him down, and just what is it that they want Garland to do?

What listeners say about Freefall

Superbly written, concept of two angles of narrative was strange at first but once used to the jumping about made absolute sense. Can’t wait for 3rd volume.
Thanks

Bloody amazing. As a WW1 and 2 obsessive I'm very fussy when it comes to fiction. Reading the back of Airborne it didn't really grab me to be v nest. However using a credit I decided to have a listen. Well am I glad I did. Easy up there with best WW2 fiction ever written.

Up there with some of the best fiction books of World War 2. A must for anyone with a interest in this period of time.

loved it, beautifully read, gritty and yet humor also.
On to the last one now.

Peter noble has inspired me to buy more books, he is a Great narrator please use him more

This is the second book in Robert Radcliffe trilogy and it didn’t disappoint, brilliantly written and narrated will be down loading number three as soon as I have posted this review.