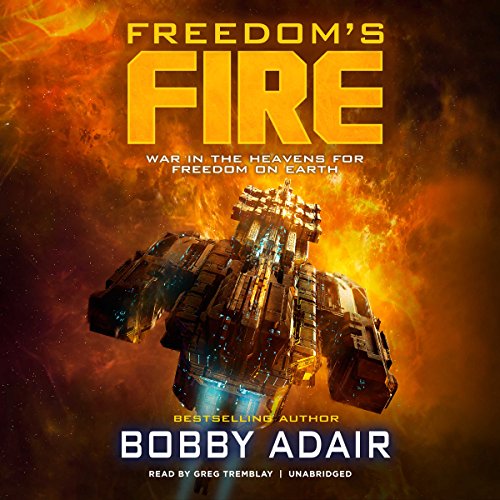 By: Bobby Adair
Narrated by: Greg Tremblay
Try for $0.00

The first interstellar war, a generation ago, left humanity enslaved. Now humans fight in the armies of their masters to save themselves from annihilation. At least, that's what the propaganda insists is true.

What the layers of lies keep hidden is how badly the new war is going for the people of earth. Now it's Dylan Kane's turn to blast into the heavens and join the battle, but what his masters don't know is that by putting a weapon in his hands, they're giving him the key to unlocking his hopes of freedom.

When the railgun slugs are tearing through his ship, and the vacuum is sucking the life out of his wounded friends, will Dylan's years of repressed rage turn into enough bravery to make his dream come true?

What listeners say about Freedom’s Fire

If the beginning of this story doesn’t grip you immediately this series won’t be for you. Bobby Adair writes sci-fi with a lot more relationship building than most especially in military sci-fi. There’s action in a few points but like I’d imagine space to be, and I remember of the military, a lot of downtime. Adair uses the time to develop complex characters. Usually below a 4.5 star rating I won’t give it a try but this was well worth my time. Greg Tremblay does a fantastic job of differentiating voices and doing a decent female voice which is rare. I feel every time this plays being “included” I’m robbing the author of a well deserved credit.

What if you started a revolution and nobody came?

This series has been around for a while (even though it's still growing). Wonderfully written by Bobby Adair, and as usually narrated masterfully by Greg Tremblay, one of my favorate narrators! This story reminds me alot of, "The Old Man's War," by John Scalzi, not that they have anything in common, but in the interesting style of being technical, but not technical since our protaganist is a, "newbie," to actual combat, even though he takes to it like he was born to it, well, most of the time. Our Protaganist gives us a great look into his thinking, will suppressing that thinking to the aliens that have taken Earth into their loving enbrace (conquered it), and with their fateful and loyal helper's (the North Koren's, who sold out the human race, and have an elevated status that allows them to treat the rest of the world as they do their own people. Strictly, it's not PC, but it's pretty on the nose. As well, one of their first requests to the aliens, refered to as the, "Gray's," is to destroy South Korea!). Dylan Kane, our hero, is as privaleged as any American can get, one becuase he has a bug in his head that hes had since basically his birth, which allows him to see gavational fields (Like the aliens can do naturally and more profiently), and maybe other things he has yet to figure out and two, he's been able to "block," his real feelings from the alien's, who are telepathic, presenting instead a mind full of loyal and subservient thoughts. A willingness to please their new masters! Life under the aliens at first was not horrible, but then a second alien group called the "Trogs" (From Troglodites), who seem, despite the propaganda, to be soundly beating the "Grays," and of course, the "Grays" are throughing away human lives by the millions in this fight, with substandard equipment, very little information, and now, as Kane signs up (with most the people from his job), with the military as part of his plan and the plan of his collegues, to get ships and start the, "Free Navy," so they can fight the Trogs since appertly the only tactic the "Grays" have is using humans as fodder (The average new recruit has a life expendecy of minutes or hours. In fact, the equipment that each recruit uses has signs of the tramatic death of it's previous user). Then after defeating the Trogs, they would have the ships to drive off the Grays and free their world! The plan sounds good, but the execution is turning out to be a problem, and worse, Kanes superior is a lunatic that believes her authourty is more important than effective tactics and the soilders lives, underneath her.
While tackling all this, Adair has infused this book a suprizing amount of humor, which is amazing considering the accurate protrayal of how bloody, deadly, and horrible war can be. As well, he adds technological and scientific reality into this book, but if this isn't a strong point for you, he handles this deftly, and gives explanations that you can understand! This is a book well worth reading, I'd say even, a must read!

The narrator owned the story. I liked the tone of his voice. It was warm and inviting. He made it more interesting than it actually was. Great introduction, it was engaging at first. If you don't like sarcasm and dry humor you won't like this series. The main character is riddled with it. Sometimes I felt like it was the only emotions he had. Although the narrator delivered the sarcasm well, the story was not that interesting and the plot was vague. I won't be reading the rest.

This book hooked me in about 5 minutes! I was very impressed. Right from the start the story is compelling, and it never slows down, I binged this first book in a day and I'm sure the series won't take me long. Very impressive writing!

As for the reader, in a world where R.C. Bray has ruined other readers for me, this guy impressed me! The way he read really conveyed the beaten down mentality of the MC and the world he lives in. And yet, he can switch to be just DRIPPING with sarcasm when needed! I would say they only thing he could improve on is more variance in voices for female characters. But again, R.C. Bray has set a high bar. This reader was a great choice for this book and i really enjoyed his performance!

this is a fun one

loved so much about this book. The narrator is on point and the writing surprised me. This was a freebie to get me hooked so yeah my credits will now flow this way....

I enjoyed the story and will be starting the next one immediately after this review.

The Sci-Fi is fine, and the story is interesting,

The Sci-Fi is fine, and the story is interesting, Don't really like all of the sex flashbacks. Feels unnecessary and is very badly written. Stopped the book 1/3 rd in.

A masterpiece of sci-fi!

the only problem with this book is it's too short for a full credit or the money, but since I bought the box set the price is good as well. I've only listened to the first book so far, but man it is good! by the box set while it's on sale.

8mins in and reaching for my cyanide tablets.

OK 8mins is not a long time so I persevered and by 45mins I was hooked.

Some good ideas and waiting to see if it works out for the rebels.

This was one of those books which rates a Just OK label. I got through it, but I doubt I will be following the series... if there is one.

I listen to this book because I had a absolutely awesome Giggle and chuckle with Bobby Adair’s dustys diaries and his best performance Slow Burn .
This first book needs more attention with the characters as it’s sci-fi backdrop has you having to take note of a lot of what’s going on.
The narrator Greg does a fine job. With all the characters some of them female

I liked the narrative from Kane’s POV with enough personal insight to give you a good comfort level with him and enough action to keep the momentum going. Will be buying the next book in the series to see what happens next. The narrator was also easy to listen to as well