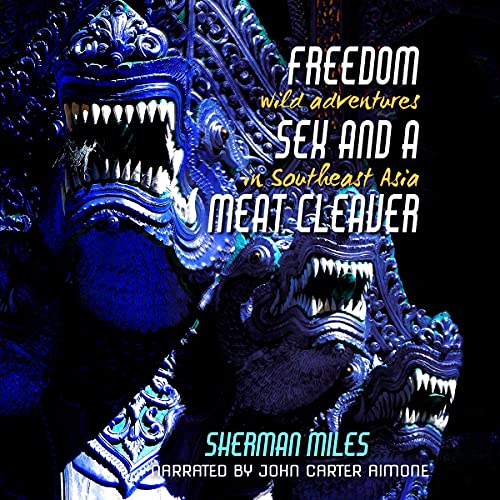 Freedom Sex and a Meat Cleaver

By: Sherman Miles
Narrated by: John Carter Aimone
Try for $0.00

Freedom Sex and a Meat Cleaver is a young man’s quest for personal freedom and self-discovery. Pierce Colter falls in love with the “Land of Smiles” while in the US Air Force and stationed at the Royal Thai Airbase in Korat, Thailand. When his tour of duty ends in 1974, he flies to Los Angeles, gets a new passport and travel visa, then heads straight back to Thailand. He's a young, wild, and free American guy craving adventure in Southeast Asia.

These stories are inspired by real events during the tumultuous period from 1973 to 1978, captured from journal entries or dredged up from hazy memories. Pierce's adventures extend beyond Thailand to the neighboring country of Laos during the CIA’s secret war with the communist Pathet Lao. From border towns of Cambodia during Pol Pot’s takeover of Phnom Penh to hidden waterfront opium dens on the island of Penang off the coast of Malaysia - and on and on and on, to one too many slings in Singapore. For the first time in his life, Pierce is totally free to explore, to experience the world, and discover who he really is. He has no one to account to except himself. He arrives at the threshold of personal freedom, only to learn, as, with all freedom, there’s a price to pay with each step.

What listeners say about Freedom Sex and a Meat Cleaver