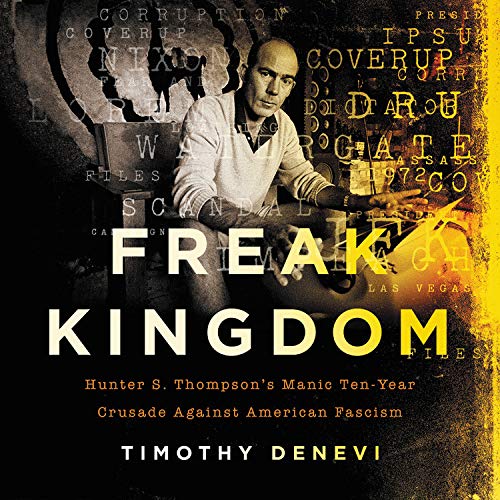 By: Timothy Denevi
Narrated by: Mark Boyett
Try for $0.00

The story of Hunter S. Thompson's crusade against Richard Nixon and the threat of fascism in America - and the devastating price he paid for it

Hunter S. Thompson is often misremembered as a wise-cracking, drug-addled cartoon character. This book reclaims him for what he truly was: a fearless opponent of corruption and fascism, one who sacrificed his future well-being to fight against it, rewriting the rules of journalism and political satire in the process. This skillfully told and dramatic story shows how Thompson saw through Richard Nixon's treacherous populism and embarked on a life-defining campaign to stop it. In his fevered effort to expose institutional injustice, Thompson pushed himself far beyond his natural limits, sustained by drugs, mania, and little else. For 10 years, he cast aside his old ambitions, troubled his family, and likely hastened his own decline, along the way producing some of the best political writing in our history.

This timely biography recalls a period of anger and derangement in American politics, and one writer with the guts to tell the truth.

"Based not on the Upper West Side or in West Hollywood but in Woody Creek, Colorado, Hunter S. Thompson got onto the page more of the 1960s and 1970s than any of his contemporaries. In this painstaking, exquisitely detailed, and impressively balanced book, Timothy Denevi conveys at what extraordinary cost to Thompson such herculean work was accomplished. If a writer doesn't aim to cause trouble, why even bother?" (David Shields)

"Surreal, astonishing, and at times deeply disturbing, Freak Kingdom is a welcome and timely revision to the popular hagiography of the larger-than-life Hunter S. Thompson depicted by popular culture. A necessary read for anyone who wishes to understand our current political moment." (Jennifer Percy, winner of the National Magazine Award and author of Demon Camp)

"Hunter Thompson is back and very much alive in this sympathetic and sharply written 'best years of his life' bio. I loved it." (Terry Gilliam, director of Fear and Loathing in Las Vegas)

What listeners say about Freak Kingdom

absolutely love this book. well written with great prospective, and facts.i would highly recommend this book.

The author truly knows HST and I apreciate the honest look into the rise and fall of an American icon and personal hero of mine.

author has an internal need for Hunter to be Jesus

The Author reveals a lot of himself in this book, i found that quite pathetic, as i spent the rest of the book disillusioned and wondering how much is factual. If the author had spent a few hours in therapy, he might've made this book the great journey he intended it to be, but sadly, he needs Hunter to be the perfect agent to solve his own revulsion for the current state of America.