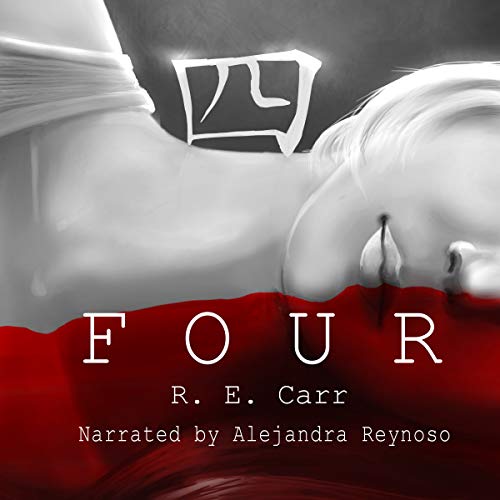 Finding a job is never easy, and the only employment Gail usually finds is acting as Girl Friday for the mob. Lucky for Gail, Georgia Sutherland has just the job for her - that is, if she can handle working nights, managing a little blood, and a boss who's been dead for centuries.

In a single interview, Gail's world turns upside down as she discovers that all she’s seen in Hollywood isn’t quite true; vampires don't combust in sunlight, but they do fall in love.

Are Georgia's stories enough to persuade Gail to take the gig catering to an antediluvian vampire who's thirsty for a new personal assistant? If Gail wants to live out the year and retire rich, she just needs to remember the Four Rules that govern undead society.

What listeners say about Four

The Final Countdown to a unique twist on the genre

So, I’ve been following Rachel for some time thanks to a group I am a member of (Hi Team TW). Everyone in the group spoke very highly of this series and I have been pinging Rachel from time to time to find out if and when she would have an audiobook edition planned for the series. So, naturally, when I got word that this release was coming, I was one of the first people to pre-order my copy.

So, with all of that said, I really wanted to like this story. So many folks had such high praise for it, and I wanted to be one of them. To say that I enjoyed this story would be an understatement. What a unique take on the vampire genre. I absolutely loved Mr. Lambley! A ginger vampire…awesome! Specifically, I enjoyed his character because I would likely end up a similar style vampire given my level of nerdiness.

Let me start by saying I loved Georgia’s character and how she evolved throughout the story. I was also drawn to the various pop culture references thrown into the story; The Final Countdown!!! I also drew several connections to other stories I’ve listened to or movies I’ve watched, whether intentional or not. For example, the dance scene immediately reminded me of Sarah’s dance scene in Labyrinth.

There was a couple of great twists in the story and, from what I’ve read in other reviews, this appears to be a trend throughout the story.

The audio narration of the story left me torn. Alejandra did a great job with the dialogue for the story but the tags (he said, she said, etc.) had what felt like an unnatural, extended pause between the dialogue ending and the actual tag. There was also a vocal style shift between the dialogue and the tag. I don’t feel the tags were overused, but the pauses, at times, distracted from the narration. All of that said, I did enjoy Alejandra’s vocal differentiation between characters. Again, Mr. Lambley was wonderful! And the nervousness/timidness expressed by Gail was VERY believeable.

This was an easy 5/5 story. The recommendations I was given were well founded and Rachel has a real talent for putting a unique twist on the genre. Try out this series, you will love it!

The story is well written with many cool characters that are voiced by the amazing Alejandra Reynoso. It would’ve been hard to believe that she voiced every character in this 17 hr audio book but knowing her previous work as a voice over actor it just further shows the talents of Ale. Each character felt alive & different. I also liked the narrator voice that she does because it reminds me of Pegasus from yugioh but a female version lol :)
Calm & smooth
Always left me wanting to know what was next. I’m glad I chose this book as my 1st audio book. I look forward to future works by Ale & Carr :)

I've read this story on kindle and it was nice to be able to jump back into the world in audio format. It is still a fun ride.

I've seen some complaints about the narrator. I found that slightly increasing the speed helped me. I've done that before with another narrator, so it doesn't really bother me.

Definitely worth checking out if you want a vampire story with a twisting plot that will keep you on your toes.

An Unglamorous Take on The Undead

This book acknowledged all the tired old clichés and blew them out of the water.

I struggled to understand the ending. it was a surprise and I really had to pay attention to what was going on. this isn't your normal vampire book. can't wait for the next one.

Love the story, the narration, just everything. And the twist(s). Shyamalan needs some lessons. READ THIS !!!!

Better than I thought it would be

I found I enjoyed this book. The story is pretty entertaining and a unique take on vampires. There was enough paranormal content to offset the romance stuff, so that is a plus for me as well. The narration is well done, in my opinion. There were some odd "so and so said" dialog tags that were delivered in the voice of the character saying the line. It bugged me at first but after a bit, I ignored it and it faded into the background and I stopped noticing it. All in all, I enjoyed the listen and would be open to more from this duo.

A modern twist on ancient monsters

This book was a lot of fun. R.E. Carr managed to recreate the vampire legends without going the sparkly route, and created a book that was fun and fast paced, with lots of snappy banter-seriously, check this book out; you will not regret it! Her other stuff is great, also-alas, they are not on audible yet...sigh...
Now on to the narrator-this lady was amazing. I have heard several female narrators, and she is by far the best. One thing that is interesting is that she has chosen a dramatically different tone and pace for narrating the books, as opposed to when she is voicing the characters. This turned out to be a good choice, as the narration just faded into the background, allowing all the fun dialogue that RE Carr is awesome for to really stand out. Carr really made a great choice, as this lady pretty well became the characters, to me.
So check this book out-it is a lot of fun, and will have you waiting for the next one-unless you want to go grab the kindle editions right away, of course.

I can’t even listen to the story with the over dramatic narrative. Ruined the book. Had to turn it off.

Story that I could listen to itself seemed to start pretty good. Would return it

The narration was fantastic and the story is superb! Everyone loves an imperfect vampire and the humans that deal with them!