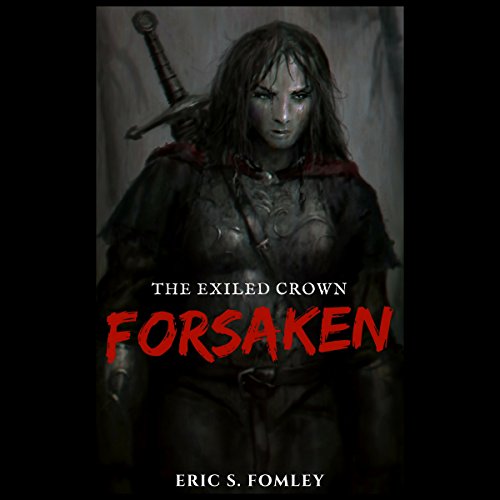 By: Eric S. Fomley
Narrated by: Charlie Boswell
Try for $0.00

Forsaken is the first tale of The Exiled Crown, an ongoing short story series. When a village is attacked by brigands, a vagrant princess takes it upon herself to see that justice is done at the point of a bloody sword.

What listeners say about Forsaken

This is a short one. It's only 14 minutes long, but about half of that is literally this one vagrant princess just... slaying. So, it's short but it was quite an enjoyable 14 minutes of my time.

Quite a fast paced, bloody, and action-packed 14 minutes that introduced one Ayla, princess of... Echor? Ichor? Which is a kingdom far away.

My one criticism here is that this would have benefited about 100% from having a female narrator. The narrator himself was... okay. Just okay. Not my favorite, but there wasn't anything about him that was glaringly unlikable. But... since we have this badass AF lady, it would have been nice to have a badass AF lady telling me the story too.

Also, I was given a free copy of this audiobook by the author in exchange for an honest review. FYI :)

This was a great start even though I didn't review it. I just did this because I had did a review for the second one.

I received a promo copy of this for review purposes. I had never heard of this author before but was interested in listening to it. I was unsure where the author was going, but wound up enjoying it in the end. I will be looking for further installments in the future.
I can't say too much good about the narrator. There seemed to be no real difference in any of the character voices.

The way it ended.
The narrator.

His voice seemed kind of boring.

Do you think Forsaken needs a follow-up book? Why or why not?

Yes. A sequel would be nice.
It was definitely left open-ended.

Story is Excellent, Narrator is Painful

I thought it was well written.

I liked the protagonist. She is capable, takes no crap and knows what she wants. I don't want to butcher her name, but the whole story is about her, so it should be obvious who she is.

Everything, I really despised his reading of this story. I would like to change the narrator out for someone who doesn't read as if someone keeps poking them in the arse at the end of each sentence. He doesn't put any real emotion into the story, and he doesn't use voices to distinguish characters. The problem with the latter is there are places with no speech tags, so it's hard to tell who is speaking without stopping, rewinding and listening again if you missed it the first time.

Could you see Forsaken being made into a movie or a TV series? Who should the stars be?

Without the current narrator and assuming someone else stepped in who did the story justice, I think this short story would receive a full five stars. Currently, the story is five stars, and the narration is a very generous two stars.