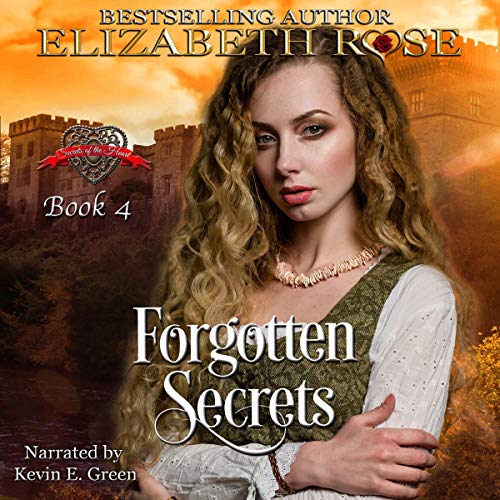 Known as a gossip and for never being able to keep a secret, Morag Douglas longs to change her reputation. She strives to do great things like her sister and cousins and desires to be a true member of the followers of the Secret Heart. Then an opportunity arises for her to be mentored in this secret group of strong women. But when she meets up with the mysterious knight Sir Bedivere, her plans go astray.

Sir Bedivere Hamilton arrives at Rothbury Castle harboring a dark secret. He is an assassin with one more job to do before his debt will be paid. But when his last mission directly involves Morag, a woman who has taken his interest, he must make a choice that could change both their lives forever.

Can a woman who has everything to prove help save a man from making the biggest mistake of his life? And will a man with a debt to pay commit treason to protect the woman he loves?

What listeners say about Forgotten Secrets

Morag Douglas is determined to curb her gossip, discover her special skill (if she has one), and prove she is worthy of being included as a Follower of the Secret Heart. Sir Bedivere Hamilton wants to complete his last mission as an assassin and free his family, but all may not be as it seems in this mission. They are wary of each other at first, but they fall in love, and when they do, things get complicated. This is an action-packed story with unforgettable characters and filled with intrigue, danger, betrayal, twists, turns, surprises, family, friends (including a couple of ghostly sisters), and enemies. I enjoyed Morag’s story. Kevin E. Green’s narration brought the story to life. I especially like his portrayal of the many times grumpy Reed and Branton’s innocent screw-ups. The Secrets of the Heart series is part of an awesome and engaging family saga that includes The Legendary Bastards of the Crown and Seasons of Fortitude. I highly recommend all three series.

Finally Morag got her man and notice for being more than just a gossip. Very good story and awesome narration. You will enjoy@

Book 4 for the series is about Morag Douglas younger daughter of Reed Douglas one of the Legendary Bastards of the Crown and Sir Bedivere Hamilton. I enjoyed listening to this audiobook and Kevin E Green did an amazing job of making the book come to life. The story had mystery, danger, betrayal, a few twists and turns, surprises, ghosts, love and so much more. I loved the whole series but I loved book 4 the most. I started listening to it around 8:00 pm and did not stop until I was done with the book. I kept saying I would finish in the morning but I just had to see what happened next so I finished it in the middle of the night. I highly recommend any book by Elizabeth Rose and I do not think you will be disappointed.

I received a copy of this audiobook from Elizabeth Rose and I am giving a honest review.

This is such a beautiful story. From beginning to end I was captivated, as if I went on a adventure and took this journey myself. I loved the little life lessons that were woven throughout the story.
This is a must have. So beautiful.

Elizabeth has written a fabulous story about more than one secret. It had everything you would want in one. A touch of magic, love and adventure!
Kevin E Green is a talented narrator! I love his accent and his voices for the characters.

Morag was the hear all - tell all gossip. When she is taken back to her family, in Scotland, she doesn’t think she will ever get back to the secret garden.
When the Earl that sponsored the 4 girls is killed in battle for the king, the king is going to require Lady Ernestine to choose the next earl to take over the castle and all their riches.
Sir Bedivere is an assassin to kill traitors against King Richard. He accepted the assignments to free his family from the dungeon of Whitmore, the king’s assistant.
Will Morag ever learn to keep gossip to herself or will it be the end of her?
Kevin E Green is wonderful as the narrator for this series.

Morag feels left out, doesn't know her place in the world. In her quest to find her place she finds herself falling for a man with deadly secrets. He is forced to kill to save loved ones. What happens when they find each other only to discover that her loved ones are also in danger from him.

Yet another brilliant story

Loved every second of this 4th and last book of this series Secrets of the Heart. I just couldn't dtop listening. I loved it just as much as the 3rd one. I loved that the triplet Legendary Bastards were in the story also. Love the narrator Kevin Green. He's got a different voice for every character. I really don't want all these stories of all these series to end. It's like all the characters of each series has become part of my life and family. I shall miss them all.
I can't wait for Marden of the series Pirate Lords to come out on Audible as I've already listened to Tristan. Next one I'll be listening to is Keeper of the Flame, Aurics the sorcerer's story of the series Second in Command. And after that I'll be listening to the series Barons of the Cinque.

I have just finished the fourth book of the series Secrets of the Heart.
What a fantastic series this is. Morag is a younger daughter of Reid who was one of the triplet bastards of the crown. Morag had lived in the shadow of her older sister for all her life, had no confidence and needed her sister and 2 older cousins for support and for them to defend her in times of trouble. She needed to find her own confidence when the three older girls married. Her Father had fostered her and her sister and two cousins when they were all small but the older girls married and she was alone. Then along came Sir Bedivere. He was an
Assassin and his last job was to kill Reid, Morag’s father. Sir Bedivere’s family were all locked in a dungeon and his last task was to get them set free by killing Reid. This was the deal. It is a very exciting book and the love grew and Morag became stronger and
Not so needy and dependent. The narration was perfect and the narrator brought the story to life with different voices and accents.
Miss Rose finished this series excellently and I must say I enjoyed every
Word of it. Thank You so much.

A most annoying heroine.

the heroine is so annoying and such a dumbass.
I love Kevin's voice for most of his performances except for his voice for Morag. and just added to the my annoyance to her character.