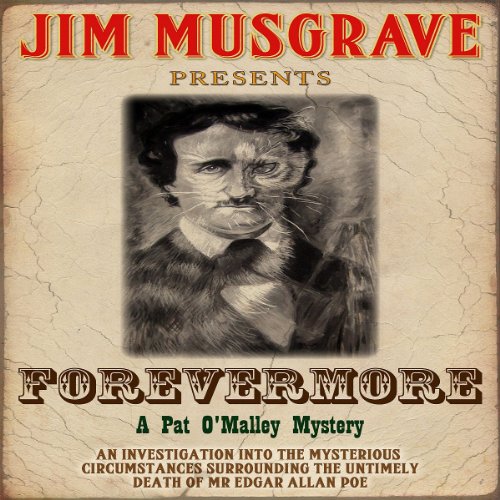 By: Jim Musgrave
Narrated by: Shandon Loring
Try for $0.00

In post Civil War New York City, Detective Pat O'Malley is living inside Poe's Cottage in the Bronx. O'Malley is haunted by Poe one night, and the detective finds a strange note. As a result, O'Malley decides to prove that Edgar Allan Poe did not die in Baltimore from an alcoholic binge but was, instead, murdered. O'Malley quickly becomes embroiled in a "cold case" that thrusts him into the lair of one of the most sinister and ruthless killers in 1865 New York City.

Jim Musgrave's Forevermore is a quick read in four acts that will keep your mind razor sharp trying to solve the mystery of Poe's murder. Pat O'Malley must first find out how to become intimate with females before he can discover the final clue in this puzzle of wits, murder and romance.

What listeners say about Forevermore

This story was really cool, using historical characters and events in a creative way. However, the narrator left a lot to be desired. I still haven't decided whether his native accent is Irish or American. I can say that neither was consistent. His New York accent sounded Australian. Truly terrible. Very distracting. Significantly detracted from the story.